Financial affairs threaten to overshadow his achievements and undermine the institution 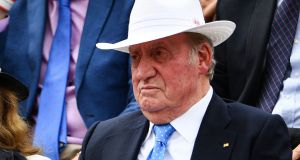 After days of speculation, Spain’s former king Juan Carlos has ruled out making a dramatic return home from self-exile in Abu Dhabi over the Christmas holiday. But he is hoping that a recent payment to his country’s tax office will pave the way for an eventual homecoming and help clear the cloud of disgrace that hangs over him.

Juan Carlos (82), who abdicated in 2014, shocked Spaniards by travelling to the United Arab Emirates in early August to escape a growing scandal surrounding his financial affairs. He went with the blessing of his son, King Felipe VI, and the knowledge of prime minister Pedro Sánchez.

But on December 9th, the former king’s lawyer said his client had made a voluntary payment of just over €678,000 to the Spanish tax authorities, apparently in an effort to close an investigation into his finances which had begun since his flight. The supreme court had been investigating his use of credit cards belonging to the Mexican tycoon Allen Sanginés-Krause.

The belated payment has fuelled reports that Juan Carlos is plotting an imminent return to Spain.

“The former king wants to come back,” his friend, the former senate speaker Juan José Laborda, told EFE news agency, adding “the logical thing would be an agreement between Felipe VI, the royal family and the government”.

Despite rumours that he planned to travel back to Spain in time for the Christmas holiday, sources close to the former monarch have now ruled out this timeframe, citing Covid-related concerns and his already frail health. In addition, questions remain as to whether the payment will satisfy the authorities enough for him to return at all without fear of legal reprisals.

Meanwhile, rather than quieting the controversy surrounding Juan Carlos, the attempt to legalise his finances has only inflamed it further, with many seeing the settlement as mere confirmation of his wrongdoing.

“Nobody is doing more for the republican cause than the former king,” Miguel Urbán, a leftist MEP and co-editor of a new book critiquing the monarchy, told The Irish Times.

“During the transition to democracy we were not given the chance to vote on the issue of the head of state,” he added. “Now, 40 years later, there is nothing to justify the argument that Spanish society is not mature enough to decide on this.”

Recent data suggests that many Spaniards agree. For several years, official polls were not carried out on the monarchy, apparently due to concerns about its sliding credibility. Revelations in 2012 that Juan Carlos had been elephant hunting in Botswana, at the height of Spain’s banking crisis, were seen as particularly damaging. The fact that Corinna Larsen, a German-born businesswoman who was identified as his lover, had accompanied him on that trip only made matters worse.

When several Spanish publications commissioned an in-depth survey of the monarchy this autumn, it showed Juan Carlos’s stock to be low. Although his successor, Felipe, is seen as more honourable and trustworthy, just under half of respondents said a referendum on the monarchy was necessary. While 41 per cent said they wanted a republic, that rose to 55 per cent among 18-24-year-olds.

It is older Spaniards who tend to hold Juan Carlos in high esteem. Despite being hand-picked by his mentor, the dictator Francisco Franco, to succeed him as head of state, the young king was instrumental in helping usher in parliamentary democracy. The goodwill he earned during those crucial years of the so-called Transition lasted for much of his 39-year reign.

It is that legacy which Juan Carlos’s staunchest supporters, mainly on the political right, often underline. But, with two other judicial investigations still open, his financial affairs threaten to overshadow those achievements.

The supreme court is investigating a €65 million payment Juan Carlos received in 2008 from the Saudi royal family, the case which triggered his flight to the Persian Gulf. Prosecutors want to know if the money, which he then reportedly gave to Larsen, was a bribe linked to the awarding of a fast-train construction contract to a Spanish-led consortium. Another investigation is looking into offshore funds he allegedly kept in Jersey.

Both investigations reach back to when Juan Carlos enjoyed regal immunity, making it unlikely he would face prosecution even if guilty, many believe.

However, as well as feeding into the broader question of the monarchy’s future, his woes have had political repercussions, adding to tensions within the coalition government.

Sánchez’s Socialist Party has a long tradition of republicanism, which it put to one side four decades ago in order to support Juan Carlos and the Transition.

“The Spanish government will always defend the constitutional pact of 1978,” Sánchez said in a recent interview. “Our parliamentary monarchy must be respected. The monarchy is not in danger in Spain.”

In mid-December, the Socialists voted against the creation of a parliamentary commission to examine the former king’s finances, along with the conservative Popular Party (PP) and far-right Vox, in a rare display of cross-party unity which blocked the initiative.

However, while they still stand by the monarchy, the Socialists have become increasingly uneasy about Juan Carlos’s baggage and some in the party have started calling for him to be expelled from the royal family.

The junior partner in the coalition, the leftist Podemos, has fewer inhibitions and voted in favour of the parliamentary investigation. In addition, Podemos posted an anti-monarchist video online, showing unflattering footage of the royals, including Juan Carlos alongside Franco, members of the Saudi royal family and Larsen. The soundtrack was the music to TV drug drama, Narcos.

Reports from Abu Dhabi suggest the former king is confident about his legal status and is desperate to end his self-exile soon. But, having inflicted so much damage on the institution he led for nearly 40 years, many are wondering if he will – or indeed should – return at all.