Slovak leader clings on as coalition cracks over murder of reporter 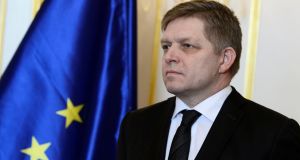 Slovak prime minister Robert Fico has accused his critics of trying to oust him in a “coup”. Photograph: Radovan Stoklasa/Reuters

Slovak prime minister Robert Fico is fighting to save his government after one party vowed to leave the ruling coalition unless he called snap elections. The threat came amid public outrage over the murder of a journalist who investigated links between politicians and organised crime.

Mr Fico and his Smer party did not publicly respond on Tuesday to the demand from the smaller Most-Hid party, but the man who has led Slovakia for 10 of the last 12 years will face a tricky no-confidence vote in parliament next Monday if he retains power until then.

Slovakia was pitched into political crisis after Jan Kuciak and his girlfriend Martina Kusnirova, both 27, were found shot dead at his house on February 25th.

Kuciak’s last article, which was published posthumously, revealed business links between political figures who are close to Mr Fico and Italian businessmen in Slovakia who are allegedly connected to the Calabria-based ‘Ndrangheta Mafia group.

Rallies involving tens of thousands of people demanded an independent investigation into the double murder and an end to corruption in Slovakia, but now protesters say they will not be satisfied until the government steps down.

After resisting calls to resign and riding out several previous scandals, interior minister Robert Kalinak resigned on Monday, depriving Mr Fico of one of his closest allies and a co-founder of their populist Smer party.

On Tuesday, the Slovak prosecutor general’s office confirmed that it was investigating Mr Kalinak over allegations from a former prosecutor that the erstwhile minister and top police officials had sabotaged a major corruption inquiry.

A spokeswoman for the prosecutor general also announced the detention in eastern Slovakia of Italian businessman Antonino Vadala, on a warrant issued by an Italian court requesting his arrest for an alleged drug-related crime.

Mr Vadala was named by Kuciak as having ties to Slovak political figures and the ‘Ndrangheta, and he was previously held with six other Italians for questioning over the double murder. He was subsequently released and denies wrongdoing.

Mr Fico’s government has formed a special team to investigate the killings and has sought help from foreign police forces, while offering a €1 million reward for information leading to the murders being solved.

He has also accused his critics – including liberal president Andrej Kiska, opposition parties and segments of the media – of “dancing on the graves” of the dead couple and of trying to oust him in a “coup”.

Mr Fico even suggested that Mr Kiska was conspiring with billionaire philanthropist George Soros to bring him down – a claim that was met with widespread derision but repeated and backed by Hungary’s populist leader Viktor Orban.

The coalition of Smer, Most-Hid and the Slovak National Party holds 78 of the 150 seats in Slovakia’s parliament.

Mr Fico’s government would fall if 76 deputies voted against him in Monday’s planned confidence ballot. That would not trigger elections, however, and Smer could try to rule with a parliamentary minority. A snap election would be called automatically if 90 deputies backed such a motion.