Ratko Mladic, the Serb warlord who terrorised Bosnia in the 1990s, was forcibly removed from court after a shouting outburst delayed the reading of the verdict in his trial for genocide committed by the International Criminal Tribunal. 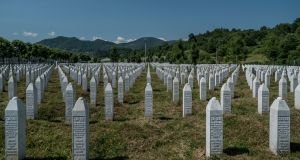 The Srebrenica-Potocari Memorial Centre and Cemetery in Potocari, Bosnia, where many victims of the Srebrenica massacre of Muslim men and boys are buried. Photograph: Andrew Testa/The New York Times Ratko Mladic, the former Bosnian Serb general, entering the courtroom in The Hague on Wednesday. Photograph: Peter Dejong/Pool via The New York Times 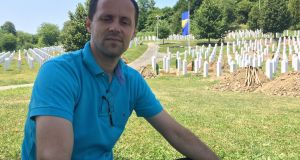 Nedzad Avdic, a survivor of the 1995 Srebrenica genocide, pictured in July 2017 at the Potocari cemetery where about 8,000 Bosnian Muslim victims of the massacre are buried. Photograph: Daniel McLaughlin

Serbia’s leaders have called on its people to look to the future after the conviction for genocide of former Bosnian Serb commander Ratko Mladic, whose victims and their relatives found some solace in the life sentence that he received.

A United Nations court ruled that Mladic (74) committed crimes against humanity during Bosnia’s 1992-5 war, including genocide at Srebrenica in 1995, when his troops massacred about 8,000 unarmed Bosnian Muslims in Europe’s worst atrocity since the second World War.

“Today is not a day for joy, nor for sorrow, but to see what kind of future we want,” said Serbian president Aleksandar Vucic.

He urged Serbs “to start looking to the future today, to think about where and how our children will live, how and in what way to preserve peace and stability in the region”.

A former ally of warmongering 1990s Serbian leader Slobodan Milosevic and a one-time defender of Mladic’s actions, the now pro-EU Mr Vucic said his people would “accept responsibility” but called it “a disgrace” that crimes against Serbs had not been fully punished.

Serbian prime minister Ana Brnabic echoed Mr Vucic, saying: “We need to look to the future, so we finally have a stable country . . . We need to leave the past behind.”

Top Serbian officials accept that serious crimes were committed at Srebrenica but deny it was genocide and say the UN court is biased against their people. Rights groups accuse Belgrade of doing nothing to investigate and prosecute Serbs who are accused of wartime atrocities.

On the eve of the verdict, Bosnian Serb leader Milorad Dodik described Mladic as a “legend” who gave his all “defending the freedom of the Serb people”.

Camil Durakovic, the Bosnian Muslim ex-mayor of Srebrenica, said Mladic’s life sentence “is emotionally satisfactory to myself and the families” of victims of the massacre, which whom he watched the verdict on television.

“This was the last trial before the UN tribunal closes, so I hope it’s time to say that this is not how we want to live in the future. But unfortunately, we do still have people who deny what happened,” he told The Irish Times.

Nedzad Avdic was 17 years old when Bosnian Serb troops caught him and other Bosnian Muslims trying to flee besieged Srebrenica. His father and uncle were among thousands executed, but he survived a mass shooting and escaped to safety.

“This verdict is very late for many of us who waited for so many years. But it is very important and I hope it will have an impact on relations in our country and situation in the region and in Europe, ” Mr Avdic said by phone from Srebrenica.

“It is important for all those who have denied these crimes for so many years, and I hope it will open their eyes to what was done,” he added.

“We have to begin somewhere and I hope it will be a basis for reconciliation and building the future . . . I believe there is a place for all of us in Bosnia.”