German chancellor Angela Merkel says she is not frightened by the prospect of new elections and will not step down as CDU party leader and chancellor candidate. Video: Reuters 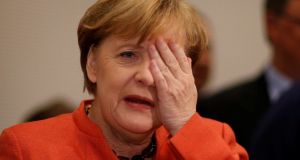 German chancellor Angela Merkel has vowed to fight a snap election if necessary to secure a fourth term in office and end her country’s political crisis.

Dr Merkel faces an uncertain future after coalition talks collapsed on Sunday evening after almost five weeks – two months after Germany’s federal election. “If new elections were to come . . . I would accept that. I’m not afraid of anything,” Dr Merkel said on ZDF public television.

She had earlier on Monday held crisis talks with the president, Frank Walter Steinmeier. He will play a central role in the coming weeks and, ahead of talks with all political parties, said he expected “readiness to form a government in the near future”.

Ongoing instability in Berlin will cast a shadow over efforts to advance Brexit negotiations, likely to dominate next month’s EU leaders’ meeting, and French proposals to reform the euro zone.

Dr Merkel led her centre-right CDU party to its worst election result in 68 years, forcing her into exploratory talks on an untested four-way alliance with the CDU’s Bavarian sister party, the CSU; the liberal FDP; and the centre-left Greens.

Hours after their collapse, the CDU leader said talks had been “on the home straight” for the “Jamaica” alliance, so-called because the would-be coalition partners’ colours matched the island’s flag. But FDP leader Christian Lindner, who walked out on Sunday evening, said his party’s “long-held doubts” about the alliance – in particular immigration, climate and fiscal policy – remained unaddressed.

A snap poll for ARD public television found that most Germans blamed the FDP for the end of the talks.

Almost two-thirds (63 per cent) of those polled favour fresh elections while just 29 per cent favour a minority CDU government.

Germany’s post-war Basic Law provides for no explicit timetable to form a new federal government. But, learning from the unstable Weimar years, high hurdles exist to dissolve parliament for fresh elections. This is possible if a president’s candidate for chancellor fails to secure an absolute or, two weeks later, a simple parliamentary majority.

The CDU leader said she was “very sceptical” about the prospects of a minority government, untested at federal level though successful in federal states. “I cannot say how things will develop,” said Dr Merkel, “but I think Germany, at heart, needs a stable government not one that has to find majorities for every decision.”

For now, she remains in office heading an acting government and will reach out to her outgoing junior coalition partner, the Social Democratic Party (SPD). After two terms as Dr Merkel’s junior partner, however, the SPD has ruled out a third alliance.

“If voters want to rate how Jamaica was driven against the wall, fresh elections are one option,” said Martin Schulz, the SPD leader.

Despite a series of political setbacks and tensions, dating back to the 2015-2016 refugee crisis and subsequent security fallout, there are no signs of a revolt in the CDU against the party’s leader. Even ambitious younger politicians, such as 38-year-old Jens Spahn, said Dr Merkel was “naturally the right chancellor in these times”.