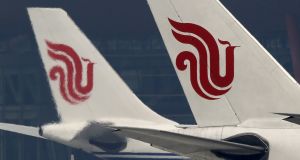 Air China aircraft in Beijing. The airline told Reuters that the decision was made because “business was not good” and did not comment on when the flights would resume. Photograph: Kim Kyung-Hoon/Reuters

China’s flag carrier Air China has indefinitely suspended flights to Pyongyang, deepening North Korea’s isolation as it faces tougher sanctions from the US over its nuclear weapons programme.

Suspension of the route comes shortly after Song Tao, China’s special envoy to the country, visited the North Korean capital to discuss regional and mutual concerns.

It also comes as the US decided to put North Korea back on a blacklist of state sponsors of terrorism.

The airline told Reuters that the decision was made because “business was not good” and did not comment on when the flights would resume.

The flights were introduced in 2008 and traditionally flew on Monday, Wednesday and Friday, although they have been intermittently cancelled for various reasons, particularly in the winter.

North Korea’s only airline, Air Koryo, flies almost-daily flights from Beijing to Pyongyang, and also flies to Shenyang, a Chinese city in the northeast that has a significant Korean minority, as well as twice-weekly flights to Guangzhou and Shanghai.

China has come under pressure from the US to use its leverage with North Korea to force an end to the country’s weapons programme, and also to increase its observance of sanctions on the North.

China and North Korea are ideological allies, and the Chinese army fought alongside the North Koreans against the US in the Korean War (1950-53). Since the demise of the Soviet Union, China has emerged as the chief supporter of the North Korean economy.

Relations between the neighbours have been strained by the North’s nuclear tests and missile launches, which China sees as a destabilising factor in the region, as well as a threat to safety in the northeast of China, as the tests are taking place near the border with China.

China’s foreign ministry said that it was unaware of Air China’s move but said airlines needed to base their route decisions on market needs.

In an opinion piece, the English-language China Daily newspaper said US president Donald Trump’s decision to put North Korea back on the US’s terrorism blacklist this week was counterproductive.

“The designation of the DPRK as a state sponsor of terrorism will only further alienate the country. It makes the prospects for talks much dimmer, and may even eliminate the possibility of any talks,” it said.

The US has also imposed sanctions on 13 Chinese and North Korean organisations that Washington believes are helping to avoid nuclear restrictions against Pyongyang and trading commodities like coal, despite the sanctions. – Additional reporting: Reuters