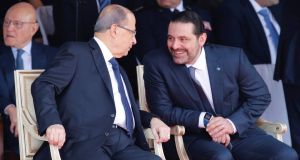 Saad Hariri (right), who announced his resignation as Lebanon’s prime minister from Saudi Arabia, talks with Lebanese president Michel Aoun at a military parade to celebrate the 74th anniversary of Lebanon’s independence in Beirut on Wednesday. Photograph: Mohamed Azakir/Reuters

The Lebanese prime minister, Saad Hariri, has said he is suspending the resignation that he announced two weeks ago from Saudi Arabia, easing a crisis that had deepened tensions around the Middle East.

“Our nation today needs at this sensitive time exceptional efforts from everyone to protect it against danger,” Mr Hariri said during independence day celebrations, having returned to Beirut late on Tuesday. “We must dissociate from wars, external struggles and regional conflicts.”

The unusual nature of Mr Hariri’s surprise resignation on November 4th prompted fears that he had been forced to leave office under the orders of his regional backers.

It came against a backdrop of a regional power tussle between Saudi Arabia and Iran and renewed Saudi condemnation of Hizbullah, Mr Hariri’s partners in government.

The postponement of his resignation will offer a brief respite for the Lebanese, who are struggling with the spillover from the war in Syria and a large refugee population in a country already rife with sectarian divisions.

Lebanon’s president, Michel Aoun, had argued that he would not accept Mr Hariri’s resignation unless he presented it in person, saying that he was acting on the assumption that Mr Hariri had been held in Riyadh against his will.

Mr Hariri said he presented his resignation to Mr Aoun at the presidential palace, but then responded to Mr Aoun’s request to take more time for consultations, “hoping it will constitute a serious introduction for [national] dialogue”.

He reiterated the need for Lebanon to remain neutral on regional disputes and conflicts “and all that undermines internal stability and brotherly relations with Arab brothers”.

Top Lebanese officials accused Mr Hariri’s patron, Saudi Arabia, of forcing his resignation and detaining him in the kingdom for days. The Lebanese rallied around Mr Hariri, unanimously calling for his return from Saudi Arabia in what became an embarrassment to the kingdom.

Western governments including the United States struck a different tone, affirming their support for Mr Hariri and Lebanon and the stability of the country, which is hosting 1.5 million Syrian refugees – nearly one-in-four of the population.

After his announcement, Hariri supporters marched through central Beirut, chanting “Saad” and waving the blue flag of his Future Movement political party.

A convoy of honking cars, some painted blue and others plastered with pictures of Mr Hariri, zipped through the streets. Dozens also gathered at his house, near the government headquarters in Beirut, to welcome him back. – Guardian