What’s the difference between Greek and Irish writers?

At a meeting in Corfu, interesting similarities and divergences became apparent 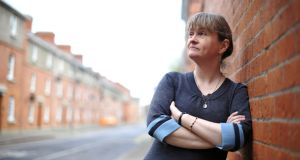 Everyone writes because there is an inner compulsion, what Deirdre Madden (above) called “bearing witness” because one carries “moral knowledge”. Photograph: Aidan Crawley

“Writing and Identity” was the central topic of Novel Encounters, a recent meeting of Irish and Greek writers in Corfu that I helped to organise. The writers described how they wrote, what they wrote and why they wrote, and although I looked for differences between the Irish and Greek mindsets, they were nearly impossible to detect.

One tangible difference, however, was that the Irish writers were more direct about their work, while the Greeks were more philosophical. Christos Chrissopoulos said that “Literature starts where philosophy fails”, and maybe that process of thinking through one’s situation is a necessary precondition to that of writing. Fail better, or fail differently?

Some writers address their personal experience while others look outside their own lives. Katy Hayes describes worlds she is familiar with, including bringing up children in a Dublin suburb. But for Ersi Sotiropoulos, writing is about a “life elsewhere”, an imagined world. She dismissed the question of writing about the current crisis (“a very silly question”) because she sees “a deeper crisis, an ethical emergency” of “emotional shrinkage”.

Everyone writes because there is an inner compulsion, what Deirdre Madden called “bearing witness” because one carries “moral knowledge”. Madden has “borne witness” to the Troubles in some of her writing, but she has also celebrated her Europeanness by living abroad and describing the ideas it evoked.

At a time when the megastates dominate world politics, where does the writer’s responsibility lie? And especially, where does a writer from a small country, such as Ireland or Greece, position herself or himself in terms of identity and nationality? These questions were seldom explicit but they were lurking in the hinterland of our discussions.

Mia Gallagher brought into the open the question of national stereotypes: she is only too aware that “Germanness” can be read as “collective guilt” for the second World War, yet, she asked, how does she reconcile this with her love for her adorable German granny? After the recent success of the far-right AfD party in the German elections, Immo Fritsche, a Leipzig professor, said, “there has never been a positive definition of German identity since the Nazi era”. So Germans today try to define “Germanness” without mentioning the war. Is national identity something writers can explore in their work when it can’t be discussed by other means?

Gallagher sees herself as “a European writer” and not part of any Irish “literary canon”. Similarly Panos Karnezis believes that writers must “decline the responsibility of being spokespersons for this or that ethnicity, religion, social class or sexual orientation”. So much so, in his case, that he writes not in Greek but in English, as part of transcending – but never denying – his “Greekness”.

More than 30 years ago, Declan Kiberd asked whether Irish people “feel ravaged by crises of national identity as they reach for the multinational snap-crackle-and-pop”. Some countries are sufficiently complacent to dispense with this process: the Swiss invented mountain-shaped chocolate and an inscrutable banking system without agonising over identity – but where are the Swiss writers?

Karnezis acknowledges that you cannot escape the past – who you are and where you, and your country, have come from. But the extent to which past experience (especially one of domination by a powerful neighbour) dictates what you write today depends on how far you can transcend that past and discover your own freedom.

Irish writers seem to be more successful than their Greek counterparts: as Madden said, “Irishness is not only less narrow than it was 20 years ago, but it was always less narrow than it was perceived to be at the time”. Greeks, however, are still grappling not only with issues of corruption, nepotism and state paralysis, but with the root causes of these problems far back in the national consciousness.

And there are practical problems, too. Small languages such as Greek need translation if the writers are to reach the larger readerships of English, Spanish or Chinese. The fact that the Greek agency responsible for facilitating this was closed down due to austerity has not improved their dilemma. In fact it was an eye-opener that no funding for Novel Encounters was available from any Greek public agency.

As one participant put it, “writing in a state of oppression means that you have to write above your weight”. What I saw in Corfu last month was a convention of writers who are determinedly writing their way towards different, and necessary, freedoms. Katy Hayes summed it up when she said “Writing is identity”. Next year in Corfu we will be looking at “Music Encounters”, with Irish and Greek musicians exploring the themes of tradition and modernity in their musical identities.