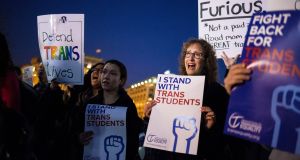 People gather outside of the White House in Washington during a protest against president Donald Trump’s plan to rescind anti-discrimination protections for transgender students. Photograph: New York Times 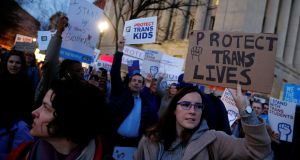 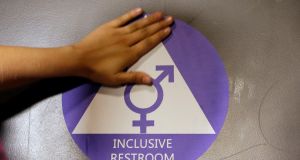 A file photo showing a sticker placed on the door at the ceremonial opening of a gender neutral bathroom at Nathan Hale High School in Seattle. Photograph: AP

The Trump administration has rowed back on transgender protection measures introduced by his predecessor Barack Obama in a move that has outraged LGBT campaigners.

In a joint decision by the Department of Justice and Education, the administration said it fell to states to decide whether students who had undergone a sex change could use toilets correlating to their gender identity.

Last May the Obama administration issued guidance directing schools to allow students to use bathrooms that aligned with their gender identity. The move followed a decision by North Carolina to prohibit transgender people from using the bathroom of their choice, a move that prompted dozens of companies to withdraw investment from the state.

Though the guidance was not legally-binding, the Obama administration threatened to withhold federal funding from schools that did not comply.

The Trump policy reversal comes ahead of a Supreme Court decision over the rights of a Virginia transgender boy, Gavin Grimm, who was denied the use of the men’s room at his high school.

At issue is a federal law known as Title IX, which outlaws sex-based discrimination in education, but it is not clear if that extends to a person’s gender identity.

Announcing the decision to withdraw former president Obama’s guidelines, attorney General Jeff Sessions said the previous administration’s reasoning “did not contain sufficient legal analysis or explain how the interpretation was consistent with the language of Title IX.”

In addition, it fell to the states to address these issues, rather than the executive branch, he said.

Since the issuance of the guidance last year, approximately half of the 50 US states have appealed the decision which has divided American society.

The decision was communicated to schools in a two-page letter, sent jointly by the departments of justice and education, and represents the first major policy move by the new attorney general since his confirmation last week.

Education secretary, Betsy DeVos said in a statement that she believed that the issue was “best solved at the state and local level.” She also said that her department “remains committed to investigating all claims of discrimination, bullying and harassment against those who are most vulnerable in our schools.”

While the measure signals a significant policy shift on a highly contentious social issue, some analysts predicted it would have minimal effect in practice as a federal appeals court had already suspended former president Obama’s order on the back of a case brought by 13 states and ahead of the expected Supreme Court judgment.

Meanwhile US secretary of state Rex Tillerson, and John Kelly, the head of the Department of Homeland Security, have arrived in Mexico Cityfor meetings with president Enrique Peña Nieto and senior government ministers, against a background of unprecedented tensions between the neighbouring countries.

Speaking ahead of the meeting, Mexican foreign minister Luis Videgaray said his country could not “accept unilateral decisions imposed by one government on another,” referring to the Trump administration’s new guidelines on immigration that aims to speed-up the deportation of undocumented immigrants.

In total, there is estimated to be close to 6 million undocumented Mexican immigrants living in the United States.

The relationship between Mexico and the United States is also being challenged by Mr Trump’s threat to revise Nafta, the North America Free Trade Area, and tax imports to the United States, many of which come from Mexico.

In addition to meetings with President Nieto, secretary Tillerson and Kelly are scheduled to meet Mexico’s ministers for finance, foreign affairs, national defence and the Interior - a reflection of the broad policy areas that could be affected by the change of regime in Washington.

President Nieto cancelled his trip to Washington last month after Mr Trump reiterated his pledge to build a wall along the US-Mexico border and force Mexico to pay for it, just days after his inauguration.