Susan Lamb, an Australian MP, tearfully explains that she has been unable to obtain a document required to renounce her British citizenship due to being estranged from her mother since age six. Australian MPs are unable to hold dual nationality. 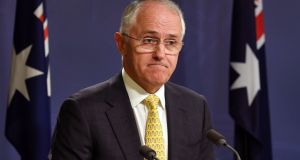 The Australian government intends to persist with pressuring the Labor member for Longman, Susan Lamb, about her eligibility to sit in parliament despite the MP delivering an emotional public statement detailing a long-term estrangement with her mother.

A tearful Ms Lamb told parliament after question time on Tuesday she was unable to obtain a key document – the marriage certificate of her parents – because her father was now deceased and she had not had any contact with her mother since she had dropped her to school, aged six, and never returned.

The Labor MP indicated she had made the public statement outlining her personal circumstances in some detail because the information she had given to date about the steps she had taken to renounce her British citizenship “wasn’t enough for the political attacks to back off”.

“I don’t know when [my mother] dropped me off and never came back what was going on,” Ms Lamb told the parliament. “I don’t know what is going on in her life now, I have no idea.

“The fact is, we don’t have a relationship. I imagine she carries her share of pain and trauma and, if it’s anything like mine, I wouldn’t wish that on anybody. I don’t speak about this trauma. So when people ask me why I just couldn’t call my mother, well, this is why.

“I’d rather not share this with my closest friends, let alone the parliament of Australia. But telling people it was deeply personal circumstances wasn’t enough for the political attacks to back off. So now it has been said.”

Malcolm Turnbull’s government has zeroed in on Ms Lamb in recent weeks, arguing she should follow the lead of her Labor colleague David Feeney and quit politics.

Mr Feeney resigned from parliament last week because he could not prove he was not a dual citizen, triggering a byelection in the seat of Batman, which the speaker of the house of representatives, Tony Smith, has confirmed will be held on March 17th.

The government has held out the prospect of referring Ms Lamb to the high court on the basis that she is a citizen of the United Kingdom, and it has the numbers in the lower house to do so even if Labor resists.

After her statement to parliament on Wednesday, senior government sources indicated they would press ahead with efforts to maintain pressure on Ms Lamb, who holds the Queensland seat of Longman by a wafer-thin margin.

The rationale from government figures was Ms Lamb’s affecting story was similar to the circumstances of the former Nationals deputy leader Fiona Nash and did not alter her status before the law.

One government source said Ms Lamb could have written to her mother asking for a copy of the marriage certificate, or pursued another legal mechanism to obtain a copy of the document. – Guardian