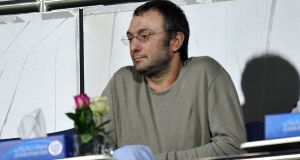 Suleiman Kerimov, a senator in the Federation Council, the upper chamber of the Russian parliament, is being questioned in France in connection with the alleged laundering of funds amassed in a tax fraud. File photograph: Sergei Rasulov jr/AFP/Getty Images

The Kremlin was battling today to secure the release of a billionaire Russian politician who was detained by French police in Nice early this week on suspicion of tax evasion.

Suleiman Kerimov, a senator in the Federation Council, the upper chamber of the Russian parliament, who has an estimated fortune of €5.3 billion, is being questioned in connection with the alleged laundering of funds amassed in a tax fraud. So far the Russian deputy, who was taken into custody by French police as he arrived at Nice airport on Monday evening, has not been charged with wrongdoing.

“Of course the senatorial status of Suleiman Kerimov and the fact that he is a Russian citizen means that we will do everything in our power to protect his interests,” Dmitry Peskov, spokesman for Vladimir Putin, told reporters on Wednesday.

The Kremlin’s declaration of support for Mr Kerimov looked set to spark a diplomatic row between Moscow and Paris. Relations between Russia and the West are already severely strained by the dispute over Ukraine and related, tit-for-tat economic sanctions.

Russia’s foreign ministry fired off a note of protest to France on Wednesday as French police extended Mr Kerimov’s detention for another 24 hours.

Russian officials said ownership of a diplomatic passport should protect the senator from prosecution in a foreign state. However, the French authorities said Mr Kerimov was paying a private visit to France and was therefore not eligible for diplomatic immunity.

The investigation of Mr Kerimov’s affairs in France first came to light early this year when police raided the Villa Hier on Cap D’Antibes that, although nominally owned by a Swiss financier, was believed to belong to the Russian senator.

Mr Kerimov did not include any property in southern France on his asset declaration as a senator this year and his representative has denied that he owned properties there.

Russian politicians have risen to the defence of Mr Kerimov, claiming the senator was being unjustly treated by the French authorities. “If there were claims against him, why were they not revealed beforehand,” said Valentina Matvienko, the speaker of the Soviet Federation. “He’s not on an Interpol search list, there’s no information and then suddenly such a churlish arrest at an airport.”

Leonid Slutsky, the chairman of the foreign affairs committee in the State Duma, the lower house of the Russian parliament, said the detention could be a political “provocation” by France. “I would like to hope that there is no political subtext here and Kerimov will soon be released,” he told the Russian news agency Tass.

Mr Kerimov made a fortune with investments in oil and precious metals in the 1990s but handed over his business interests to a trust after entering parliament in 1999. His family’s most valuable asset is Polyus Gold, Russia’s biggest gold producer.

1 Miriam Lord: Minister for Agriculture tries to get himself out of the manure
2 Skeletal remains discovered in south Dublin were of man missing since 2011
3 Martin criticises ‘over-focus’ on Border poll ahead of Foster meeting
4 Taoiseach rules out united Ireland referendum as ‘divisive’
5 Barry Cowen tells Dáil he is profoundly sorry for ‘stupid’ drink-driving offence
Real news has value SUBSCRIBE