Mladic convicted of genocide and war crimes by UN tribunal

Ratko Mladic, the Serb warlord who terrorised Bosnia in the 1990s, was forcibly removed from court after a shouting outburst delayed the reading of the verdict in his trial for genocide committed by the International Criminal Tribunal. 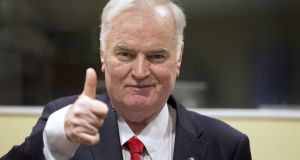 Bosnian Serb military chief Ratko Mladic gives a thumb up as he enters the Yugoslav War Crimes Tribunal on Wednesday for the verdict in his genocide trial. Photograph: Peter De Jong/ EPA

The prosecutor at the UN court which sentenced the former “Butcher of Bosnia”, Ratko Mladic, to life imprisonment on Wednesday for genocide, war crimes, and crimes against humanity, has said the landmark sentence should not be regarded as “a verdict against the Serbian people”.

Serge Brammertz, who for six years doggedly pursued charges against the Bosnian Serb general arising from his campaign of ethnic cleansing aimed at creating a “Greater Serbia” during Bosnia’s civil war between 1992 and 1995, said after the judgment: “Mladic’s guilt is his, and his alone.”

Judges at the International Criminal Tribunal for the former Yugoslavia (ICTY) found Mladic guilty on 10 of the 11 charges against him, including one of genocide: for “significantly contributing to” the mass slaughter of more than 8,000 Muslim men and boys in Srebrenica, in July 1995 – the worst atrocity on European soil since the second World War.

The village of Srebrenica had been designated a UN “safe haven” and was defended by lightly armed Dutch peacekeepers who quickly surrendered when Mladic’s troops overran it on July 11th, marching and bussing the men and boys away to be shot.

Mladic was cleared on a second count of genocide in villages adjacent to Srebrenica. Those killings were also part of what prosecutors described as a “joint criminal enterprise” by the Serb command, using mass executions to drive Bosnian Muslims and Croats out of territory they claimed as Serbian.

The court also ruled that Mladic “personally directed” the long bombardment of the Bosnian capital, Sarajevo, during which Serb forces fired down into the city from the surrounding hills, killing more than 11,000 civilians in relentless shelling and sniper fire for 43 months – the longest siege of a capital city in modern history.

Those crimes, said the presiding judge, Alphons Orie – which, apart from genocide, included extermination, murder, persecution, torture, and forced deportation – ranked “among the most heinous known to humankind”.

In relation to the Srebrenica killings, the judge observed that “many of those men and boys were cursed, insulted, threatened, beaten, and forced to sing Serb songs, while awaiting their executions”.

As to the siege of Sarajevo, he said, the Serbs’ targets often had no military significance whatsoever. The aim was to terrorise the civilian population. “People were made to live in a constant state of distress. Every time they or their loved ones left home, they wondered if they would ever return.”

Although he was present for the start of proceedings, wearing a dark suit and red tie, Mladic (74) was not in the courtroom to hear the verdicts on the 11 charges delivered, one by one.

After a break early in the hearing, his son, Darko (48) – who has always maintained his father was not responsible for the Srebrenica massacre – told reporters that Mladic had had his blood pressure checked before he returned to the courtroom and the hearing resumed.

Mladic has suffered several strokes in prison and the court had rejected several last-minute attempts by his lawyers to delay the verdicts on medical grounds.

However, as Mr Orie picked up his summation of the case, Mladic became angry, shouting, “This is all lies; you are all liars”, and was rapidly removed from the court.

Through their judgments, the three ICTY judges essentially accepted the prosecution’s contention that the plan pursued by Mladic – along with Bosnian Serb political leader Radovan Karadzic, and former Serbian president Slobodan Milosevic – was to purge Bosnia of non-Serbs, a strategy which became known as “ethnic cleansing”.

However, Mladic’s lawyers argued that his responsibility for the murder and “cleansing” of civilians by Serb forces and allied paramilitaries was never established beyond reasonable doubt. They argued that he should get no more than 15 years in jail if convicted.

Karadzic was convicted in 2016 and sentenced to 40 years. He is now joined by Mladic in serving a life sentence. Both men are appealing their verdicts. Milosevic died of a heart attack in prison in The Hague in March 2006, four years into his trial.

After Wednesday’s sentencing, the UN’s human rights chief, Zeid Ra’ad al-Hussein, described Mladic as “the epitome of evil” and said his prosecution had been “what international justice is all about”.