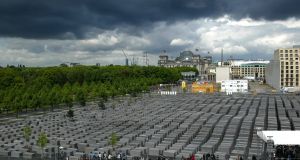 Berlin’s Holocaust memorial, pictured prior to its official opening in 2005. Photograph: Fabrizio Bensch/AP 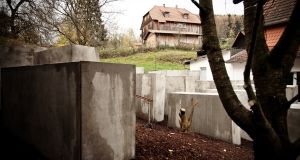 Björn Höcke’s house and the replica Holocaust memorial installed next to it by political activists.

Björn Höcke, rhetorical sharp shooter of the far-right Alternative für Deutschland (AfD), has a new sight when he looks out the windows of his 500 year-old rural farmhouse.

On the site next door, political activists have erected 24 concrete pillars, replicas of those that make up Berlin’s memorial to Jews murdered in the Nazi era.

The installation is a nod to an incident last January when Mr Höcke, in an ambiguous rhetorical flourish, declared: “We Germans … are the only people in the world that have planted a memorial of shame in the heart of its capital.”

His remark, greeted with hoots and jeers by AfD supporters in Dresden, was condemned by Jewish groups as a dog-whistle to far-right voters and by historians as an attempt to relativise Nazi crimes.

After a series of state election wins, the AfD took almost 13 per cent support in September’s federal election and entered the Bundestag with 95 seats, the third-largest parliamentary party.

Now a German agitprop collective, the Centre for Political Beauty (ZPS), has rented the site next to Mr Höcke’s rural idyll on the border between the states of Thuringia and Hesse.

In interviews Mr Höcke, AfD head in the Thuringia state parliament, has described his home as his “refuge, retreat, inspiration and regeneration space”.

But now, thanks to the 70 activists of the ZPS, his home is also next to a local branch of the Holocaust memorial beside the Brandenburg Gate in Berlin, designed by US architect Peter Eisenman and opened in 2005.

An internet live stream was established to enable the world to watch the comings and goings at the Höcke homestead – and donate to finance the ZPS project.

After a few hours, donations had reached almost €40,000 by Wednesday lunchtime – just €14,000 short of the funding goal.

The ZPS sees its initiative as an opportunity for German civil society to express how it feels about Mr Höcke’s “grotesque” Holocaust memorial remarks.

“We’re making Björn an offer: if he falls on his knees like Willy Brandt once did [at the Warsaw Ghetto memorial in 1970] to ask for forgiveness for German crimes in the second World War, we will ... shred all our files,” said Mr Stefan Pelzer, so-called “chief escalation officer” of the ZPS.

The ZPS is a well-known agitprop organisation based in Berlin. Last year, in protest at Germany’s tightening asylum policies, it installed lions in a cage in central Berlin and “threatened” to feed them refugees.