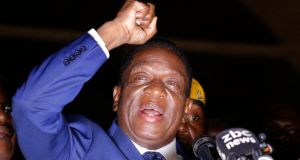 Zimbabwe’s former vice-president Emmerson Mnangagwa returned to the country on Wednesday to assume the presidency, beginning a new era for the southern African nation after almost four decades of rule by Robert Mugabe.

Mr Mnangagwa arrived at an air base in Harare and headed to State House for meetings with officials. He will be sworn in as president on Friday, the state broadcaster said, replacing Mr Mugabe, who resigned six days after the military took over the country.

Mr Mnangagwa told supporters in Harare that the southern African nation was “witnessing the beginning of a new and unfolding democracy”.

“I appeal to all genuine and patriotic Zimbabweans to come together and work together,” he said. “We want to grow our economy, we want peace in our country and we want jobs.”

Mr Mnangagwa returned two weeks after he fled abroad in fear for his life after Mr Mugabe fired him for “disrespect and disloyalty” at the urging of his wife, Grace Mugabe. Fears of further purges led to a military takeover last week. Mr Mugabe (93) had been put under house arrest and mass protests were held calling for his resignation.

The streets of Harare erupted in celebration on Tuesday when Mr Mugabe stepped down after parliament started impeachment proceedings. The ruling Zanu-PF had already removed him as its leader and appointed Mr Mnangagwa as its interim head, paving the way under Zimbabwe’s constitution for him to take over as head of state.

Under the constitution, the ruling party can name a new president up to 90 days after the resignation of the incumbent. The sole remaining vice-president since Mr Mnangagwa’s firing, Phelekezela Mphoko, has been unreachable since the military takeover and is believed to be in Japan, said a security official.

Mr Mnangagwa will remain president up to the end of Mr Mugabe’s original term, due to expire by the end of July 2018. That is the latest date by which elections must be held.

Nicknamed the “Crocodile”, the former security chief is as feared as Mr Mugabe, and was accused of being instrumental in crushing dissent in the 1980s, an operation that led to the death of at least 10,000 civilians. Mr Mnangagwa has denied the allegations.

“It would be unfortunate if Mnangagwa were to extend the same governance culture that Mugabe pursued over the past 37 years,” said Morgan Tsvangirai, a former prime minister and Zimbabwe’s main opposition leader. “But it’s possible. Birds of the same feather flock together.”

Mr Mnangagwa, he said, could choose to be Deng Xiaoping to Mr Mugabe’s Mao Zedong, referring to the transition between the late Chinese leaders, by “setting the country on a new direction”.

But there was a strong possibility, he said, that Mr Mnangagwa would carry on as Mr Mugabe had and that Zanu-PF would close ranks around him. – Copyright The Financial Times Limited 2017