Russia opens path for Putin to retain power until 2036 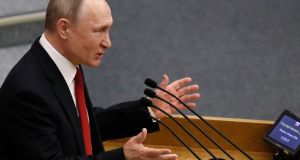 Russian deputies have backed a proposal that could allow Vladimir Putin, who has ruled the country for 20 years, to remain president until 2036.

Former cosmonaut Valentina Tereshkova, the first woman in space and now a deputy for the ruling United Russia party, told parliament on Tuesday that constitutional changes planned for this year should “reset” presidential term limits, allowing Mr Putin to run for office again when his current mandate expires in 2024.

United Russia supported her motion but said Mr Putin should be consulted, and he quickly made the short journey from the Kremlin to the Duma, Russia’s lower house of parliament.

“In principle, this option would be possible under one condition,” Mr Putin said of Ms Tereshkova’s proposal.

“That the constitutional court of the Russian Federation gives an official ruling that such an amendment does not contradict the principles and main provisions of the basic law – the constitution.”

He said the proposal should also be approved by the public in a vote on constitutional changes that is scheduled for April 22nd, which happens to be the 150th anniversary of the birth of Vladimir Lenin, founder of the Soviet Union.

Given the Kremlin’s influence over Russia’s law courts, state media and voting system, there is little doubt that the amendments will go through if Mr Putin continues to support them.

Russian citizens will have their say next month only after both houses of parliament have approved the constitutional changes, which deputies backed on Tuesday in the second of three readings. They also voted in favour of Ms Tereshkova’s proposal.

Mr Putin (67) has not said what he plans to do when his mandate ends, but his announcement in January of a constitutional shake-up fuelled speculation that he was examining ways to retain power beyond 2024.

This is his fourth presidential term and he has also served as Russia’s prime minister. The changes supported by the Duma would allow him to run for another two six-year stints in the Kremlin ending in 2036, when he will turn 84.

Mr Putin’s supporters praise him for bringing strong, centralised control back to Russia while seeing no other contender for the presidency, while critics point out that the former KGB agent has used the levers of state to stifle opposition and crush potential competitors.

As Russian markets and the rouble reeled from a plunge in oil prices, Mr Putin told deputies that the presidency should continue to be the nation’s most powerful institution, so as to provide stability and ensure the country “evolves” only gradually and withstands domestic and international turbulence.

“Everyone understands full well that inside the country, unfortunately, a lot has been done ‘on the fly’ as people say,” Mr Putin added. “We still have a lot of vulnerability, including with regard to domestic political stability, inter-ethnic and inter-religious harmony and economic and social development.”

1 Coronavirus: What will reopen in Ireland’s phases to ease restrictions?
2 Next government could bring in work-from-home tax incentives – Taoiseach
3 Unconvincing account may take some heat out of Dominic Cummings controversy
4 Coronavirus: No new Covid-19 deaths reported in State for first time since March
5 Do we really want children taught by teachers dressed in visors and face masks?
Real news has value SUBSCRIBE