Social Democrats to head centre-left bloc with 25.3% of vote, according to election exit poll 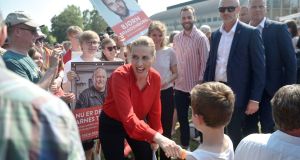 The election result saw Danes back one European trend – climate change concern – and buck two others: abandoning a populist, far-right kingmaker while following Spain in reversing the slide elsewhere of European social democracy.

With an exit poll giving her party 25.3 per cent of the vote, Social Democrat leader Mette Frederiksen is aiming be Denmark’s next – and at 41 youngest-ever – prime minister. Projections give her centre-left bloc 90 seats in the new parliament and 75 for the centre-right.

Ms Frederiksen has vowed to form a minority government, following on Danish tradition that allows a government to work once no parliamentary majority is assembled against it.

The Social Democrats want to work with the left and right on a case-by-case legislative basis. With leftist parties Ms Frederiksen has promised to defend the welfare state and reverse health and education cuts.

With the right she may push tougher immigration laws, making good on a plan to process asylum seekers’ applications in north African camps.

To critics, who accuse her of joining a Danish race to the bottom on human rights, she argued that “the price of unregulated globalisation, mass immigration and the free movement of labour is paid for by the lower classes”.

“Some Social Democrat voters who have been lost in the last few years, who didn’t support our migration policy, are returning this time,” she said on Wednesday.

But smaller leftist parties in parliament could hamper her immigration ambitions and make less radical policies the price of their support on other issues.

Outgoing centre-right prime minister Lars Lokke Rasmussen’s Venstre (Liberals) finished up slightly on almost 21 per cent, after an election eve offer of an across-the-aisle alliance to the Social Democrats.

Meanwhile, the far-right Danish People’s Party (DF), which informally supported the last Rasmussen government from the opposition, saw its vote halve to under 10 per cent.

A television exit poll suggested all three struggling to pass the two per cent parliamentary threshold.

Stram Kurs, on 1.8 per cent in an exit poll, is led by Rasmus Paludan, convicted for inciting racial hatred, burning the Koran at demonstrations and demanding a ban on Islam in Denmark.

Political analysts attributed the leftward shift in Denmark’s next parliament to a large cohort of politically engaged millennials voting for the first time.

Uppermost in their minds: climate change. A pre-election Gallup poll showed that 57 per cent of Danes think their next government should respond to climate change, reflected in almost all parties’ election programmes.

Most dedicated on the climate was the leftist Socialist People’s Party, which saw its support rise three points to 7.4 per cent.