Swine fever: ‘No way to stop it’ as millions of pigs culled across Asia 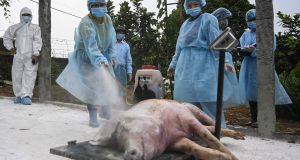 Health officials spraying disinfectant on a dead pig at a farm in Hanoi before burying it in an isolated quarantined pit to stop the spread of African Swine Fever. Photograph: AFP 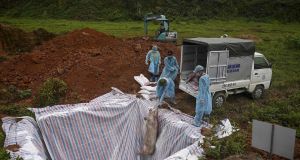 Health officials and veterinarians throw a dead pig into an isolated quarantined pit in Hanoi to stop the spread of swine fever. Photograph: Getty

South-east Asia is battling to contain the spread of highly contagious African swine fever, known as “pig Ebola”, which has already led to the culling of millions of pigs in China and Vietnam.

African swine fever, which is harmless to humans but fatal to pigs, was discovered in China in August, where it has caused havoc, leading to more than 1.2 million pigs being culled. China is home to almost half of the world’s pigs and the news sent the global price of pork soaring.

There is no vaccination for African swine fever, which causes pigs to internally haemorrhage until they die, so the only option to contain the disease is to kill any contaminated animals.

Some estimates say that in China up to 200m animals may eventually be slaughtered. The virus can last for several weeks on anything from clothes to vehicles, allowing for it to easily travel long distances.

It has spread like wildfire across Asia, causing growing devastation to the pig farmers of Vietnam and Cambodia and putting Thailand, Asia’s second-biggest pork producer, on “red alert”. Cases have increased in Mongolia, North Korea and Hong Kong in recent weeks, while South Korea is blood testing pigs at the border.

The UN Food and Agriculture organisation (UNFAO) and regional experts fear that Myanmar, Philippines and Laos will be next because they are all highly susceptible to an outbreak, due to the struggle to control the movement of pigs and pig products across porous borders.

“This is the biggest animal disease outbreak we’ve ever had on the planet,” said Dirk Pfeiffer, a veterinary epidemiologist at City University of Hong Kong and expert on African swine fever.

“It makes the foot and mouth disease and BSE outbreaks pale in comparison to the damage that is being done. And we have no way to stop it from spreading.”

“There are concerns that the disease will continue to spread across the countries in south-east Asia,” said Dr Wantanee Kalpravidh, regional manager for UNFAO, who said they believed the swine fever cases being reported by governments in the region were “underestimates”.

Dr Wantanee said problems included the lack of compensation for pig farmers in south-east Asia whose herds were culled, giving them little reason to report a disease outbreak, and fears that banning movement of pigs and pork across borders would only create a “black market which would be impossible to control”.

The implications of the outbreak are already being felt beyond Asia. Global pork prices have risen by almost 40 per cent, and long term it is likely to lead to more pork imports from Europe and America to meet demand, which will also push up global meat prices. Market analyst Rabobank said global pork supplies could fall by 8 per cent.

In Vietnam, the first swine fever case was detected in January this year in northern Vietnam, not far from the border with China.

The country has now culled about 2m pigs, or 6 per cent of the country’s herd, a figure that is expected to rise steeply. - The Guardian