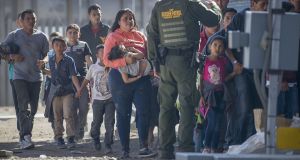 Migrants are loaded onto a bus by US border patrol agents after being detained when they crossed into the United States from Mexico on June 1st. Photograph: Joe Raedle/Getty Images

Mexican officials left the White House on Wednesday without a deal to stave off US president Donald Trump’s threatened tariffs on all Mexican goods flowing into the United States. Tweeting from Ireland, the president announced there had been progress during the talks, “but not nearly enough”progress had been made and warned that “if no agreement is reached, tariffs at the 5 per cent level will begin on Monday, with monthly increases as per schedule.”

The US vice-president, Mike Pence, expressed similar sentiments, and tweeted that “Mexico must do more to address the urgent humanitarian crisis at our southern border.” Both men said talks would resume Thursday. “We’re going to continue our conversations tomorrow because various issues have been raised which must be carefully studied in detail. This happens in any negotiation”, the Mexican foreign minister, Marcelo Ebrard, said in a Wednesday press conference.

“The starting point is both sides recognise the current situation cannot continue,” Mr Ebrard told reporters at the Mexican embassy in Washington. “A report on the numbers were given and the flow [of migrants through Mexico] is growing too much. So it can’t continue as it is.” In past years, US and Mexican officials tried to keep matters like trade, security and migration separate in their negotiations. But Mr Trump has tweeted discourtesies toward Mexico over manufacturing jobs he believes should be brought to the United States and the increasing flows of migrants - who stream north out of Central America and transit Mexico on their way to the US border.

New figures released Wednesday showed that illegal border crossings have risen to a seven-year high, underscoring the roots of the president’s rage. But political resistance to Mr Trump’s tariff threat has also intensified, with sceptical Republican senators asking to hear directly from the president before he takes an action that could shake the economies of both countries.

....talks with Mexico will resume tomorrow with the understanding that, if no agreement is reached, Tariffs at the 5% level will begin on Monday, with monthly increases as per schedule. The higher the Tariffs go, the higher the number of companies that will move back to the USA!

Mr Trump, travelling in Europe, had insisted earlier that he was not bluffing, but he also predicted that Mexico would make a deal to avert a series of escalating surcharges on its products. Mr Ebrard met Wednesday afternoon for two hours with Mr Pence and secretary of state Mike Pompeo, hoping to convince Mr Trump’s top advisers that Mexico is working aggressively to protect the border.

There was no indication that Mr Trump would be satisfied by anything short of direct evidence that Mexico had completely ended the flow of migration through its country. The president has repeatedly railed in private and public about what he considers to be a failure of Mexican authorities. He has set a deadline of June 10th, saying he will use broad emergency powers to begin taxing all Mexican goods at 5 per cent and to increase the tax to 25 per cent by October if illegal crossings do not completely end, a feat that diplomats, politicians and immigration experts said is wildly unrealistic.

During the White House meeting, which lasted about 90 minutes, Mexican officials described for their counterparts the steps they have already taken to reduce the flow of migration, including deploying additional troops to the border with Guatemala and beefing up the fight against organised crime, according to a senior Trump administration official.

The official said the Mexicans appeared sincere, but Mr Pence concluded that the efforts were insufficient because they would most likely reduce migration only at the margins, instead of the wholesale changes that Mr Trump was looking for. Mr Pence and Mr Pompeo countered by urging the Mexicans to enter into a “third safe country” treaty in which Mexico would assume responsibility for granting asylum to the migrants, something the Mexicans have steadfastly opposed.

Top legal officials from Mexico are scheduled to meet on Thursday with Pat Cipollone, the White House counsel, to discuss the treaty and other issues, the official said. Diplomats for both countries will meet at the State Department to continue the talks.

Wednesday’s announcement by US customs and border protection of a significant surge in border crossings was meant to put pressure on the Mexican government to meet Trump’s demands. More than 144,200 migrants were arrested and taken into custody along the southwestern border in May, a 32 per cent increase from April and the highest monthly total in seven years. Most crossed the border illegally, while about 10 per cent arrived without the proper documentation at ports of entry along the border.

“Look, the drugs that are coming in, the people that are coming in unchecked, they’re swamping our border,” Mr Trump said during a meeting with Taoiseach Leo Varadkar in Shannon on Wednesday. “Mexico can stop it. They have to stop it. Otherwise, we just won’t be able to do business. It’s a very simple thing.”–New York Times and Guardian