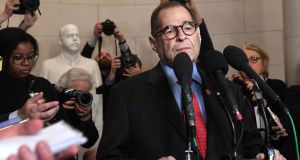 Democratic chairman Jerry Nadler speaks to the press after the House judiciary committee’s vote on the articles of impeachment in Washington on Friday. Photograph: Saul Loeb/AFP via Getty Images

The House judiciary committee has passed two articles of impeachment against US president Donald Trump, paving the way for a full impeachment vote in the House of Representatives next week.

In a vote that exposed the deep divisions between Democrats and Republicans, lawmakers on the 41-member committee voted along party lines on the grave issue of whether to recommend the impeachment of the president.

Twenty three Democrats voted to charge Mr Trump with abuse of power and obstruction of Congress, with 17 Republicans voting against. One Democrat, Ted Lieu of California, was not present in the chamber due to illness and did not vote.

Friday morning’s vote brought to a close two days of acrimonious hearings as the committee debated the articles of impeachment. The inquiry, which was opened by Democrats in September, relates to a July 25th phone call between Mr Trump and Ukrainian president Volodymyr Zelenskiy during which the US president asked Mr Zelenskiy to investigate his Democratic rival Joe Biden.

In a surprise decision, committee chairman Jerry Nadler abruptly halted proceedings at 11pm on Thursday ahead of an expected vote, announcing instead that the committee would reconvene on Friday morning. The decision infuriated Republicans, who reprimanded Mr Nadler for not consulting with the minority party about the schedule change.

The full 435-member House of Representatives will now vote on whether to impeach Mr Trump before Congress breaks for the Christmas recess next Friday. A vote on Wednesday is possible, some officials indicated, and it is widely expected that the Democratic-controlled chamber will vote to impeach a sitting president for only the third time in history.

“They had no proof, no evidence, no crime but they went ahead anyway. They’re tearing the country apart and they should be ashamed,” she said.

Other members predicted that Democrats would pay a heavy price in next year’s presidential election. But Democrats doubled down on their decision to recommend impeachment.

Minutes after the vote was announced, Mr Trump took to Twitter to announce that the US had reached a “phase one” trade deal with China, two days before new tariffs against Beijing had been scheduled to come into effect. Earlier in the day he defended himself against the impeachment charges.

“How do you get Impeached when you have done NOTHING wrong (a perfect call), have created the best economy in the history of our Country, rebuilt our Military, fixed the V.A. (Choice!), cut Taxes & Reg [ulations].” He also noted the protection of the second amendment right to bear arms and creation of jobs. “Crazy!,” he said.

Senate majority leader Mitch McConnell said he believed there is “no chance” Mr Trump will be convicted if the impeachment moves to the Senate for a trial, as expected.

“The case is so darn weak coming over from the House,” he said in an interview with Fox News. “We all know how it’s going to end: There’s no chance the president’s going to be removed from office. My hope is that there won’t be a single Republican who votes for either of these articles of impeachment.”

Mr McConnell also indicated that he could consider a short trial in the Senate after Christmas. “You can certainly make a case for making it shorter rather than longer since it’s such a weak case,” he said.

1 Miriam Lord: Does anyone care if Leo smoked or snorted?
2 Asylum claims by Georgians and Albanians brought to abrupt halt
3 Fresh delays and millions in extra costs for children’s hospital revealed
4 Child (4) died of viral infection following nap at Cork creche
5 Snow on the way as weather set to turn colder
Real news has value SUBSCRIBE