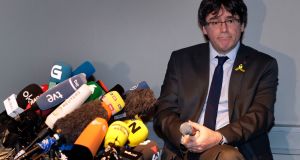 Fugitive former Catalan leader Carles Puigdemont attends a news conference in Berlin on Saturday after he was released on bail. Photograph: Michael Sohn/AP

Fugitive former Catalan leader Carles Puigdemont has made a renewed call for Spanish authorities to open negotiations over Catalonia’s secession claim, a day after he was released from a German prison.

Mr Puigdemont told reporters he hoped a German court’s decision not to extradite him to Spain on charges of rebellion shows that “dialogue is needed” to defuse the political conflict in his home country.

“I hope the situation could help . . . Spanish authorities understand that political measures are needed,” Mr Puigdemont said at a press conference in Berlin.

“This opens a new opportunity of dialogue.”

The former leader left a German prison in Neumünster on bail on Friday, almost two weeks after his arrest, after the Schleswig state court in Germany decided the charge of rebellion did not warrant extradition because the accusation is not punishable under German law.

Mr Puigdemont can still be extradited on the less-serious charge of misuse of funds to hold Catalonia’s banned independence referendum last year.

German minister for justice Katarina Barley applauded the court’s decision to free Mr Puigdemont on bail as “absolutely right” and what she had expected.

Ms Barley said it was now up to Spain to prove the other charges against Mr Puigdemont, which she said “won’t be easy”. She said that if Spain could not prove the allegations of misuse of public funds, “then Mr Puigdemont will be a free man in a free country – namely in Germany”.

Misuse of public funds carries a sentence of up to eight years in Spain, while a rebellion sentence can reach 30 years. Spain’s prime minister, Mariano Rajoy, speaking in the southern Spanish city of Seville, said his government respects the decision by the German court. He said his government “upholds and abides by” rulings by courts in Spain and elsewhere.

Mr Rajoy’s position was not shared by the leading politician of his conservative Popular Party in Catalonia. Xavier Garcia-Albiol said the decision not to extradite Mr Puigdemont could hurt the “confidence” Spaniards have in “European institutions”.

Mr Puigdemont, 55, told reporters he would stay in Berlin until his extradition case is concluded. If he is not sent back to Spain, he said he plans to return to Belgium, where he has established residency in Waterloo since fleeing from Spain in October. The former Catalan leader was detained on a European arrest warrant after entering Germany on March 25th.

The issue of breaking century-old ties with the rest of Spain has divided the 7.5 million residents of the wealthy Catalonia region roughly in half. Pro-independence parties managed to maintain their slim majority in the regional parliament during local elections in December. The pro-independence parties have since been locked in drawn-out negotiations on how to form a government, with Spanish courts blocking efforts to reinstall Mr Puigdemont or elect any other jailed separatist as regional head.

On Saturday, the speaker of Catalonia’s regional parliament again proposed that jailed separatist activist Jordi Sànchez be elected as the new Catalan leader. Mr Puigdemont also said on Saturday that he was backing a second attempt to elect Mr Sànchez, who failed last month to convince a judge to let him out of jail to attend an investiture debate in the Barcelona-based chamber. – AP