More than 740 firefighters battled a forest fire in southern Portugal over the weekend as temperatures climbed to near record highs in the Iberian Peninsula amid a Europe-wide heatwave. Video: Reuters 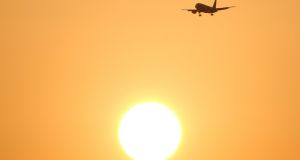 A passenger aircraft flies past the sun at sunset during a hot summer day in Malaga, southern Spain. Photograph: Reuters

Portugal and Spain are roasting in a southern European heatwave that has produced temperatures of near record figures – with the hot conditions threatening to stick around for days to come.

The extreme weather, caused by an influx of hot air from Africa, is also carrying loads of dust from the Sahara Desert across some parts of the continent.

Portugal has issued red health alerts for extreme heat for more than half the country, with thermometers approaching 46 degrees on Saturday.

The country’s highest ever recorded temperature was 47.4 degrees in 2003.

Spain also issued warnings of extreme heat for its southern areas, with temperatures expected to reach 45 degrees in the cities of Seville, Huelva, Badajoz and Cordoba. Spain’s all-time record of 46.9 degrees was set in Cordoba in July 2017.

In southern Portugal, the town of Evora was almost at a standstill on Saturday as only a few foreign tourists dared to venture out to take photographs of the Roman ruins called Diana’s Temple.

Across the Iberian Peninsula in Barcelona, where the stifling air barely stirred during the night, Spaniards took to the beach with families and friends, along with swarms of sweating tourists.

Those who could not make it to the sea had cold drinks under large umbrellas in city squares. Others doused their faces and necks in public water fountains, or simply pulled down the shutters and stayed at home.

Health officials issued reminders about the dangers that extreme heat can pose, especially for the elderly and the young.

The rest of Spain, including the normally wet and temperate northwestern region of Galicia, was also punished by the sun and heat.

The heat wave broke local temperature records at eight places in Portugal on Friday. It also played a part in the deaths of two men, one in Barcelona and the other in the southern Spanish region of Murcia, according to Spanish authorities.

The hot, dry conditions have led to several wildfires in Portugal.

Nearly 700 firefighters and 10 water-dumping aircraft are fighting the biggest outbreak, which has burned 1,000 hectares (2,470 acres) near the town of Monchique in the southern Algarve region.

Forecasts indicate that the hot air from Africa, which turned parts of the sky a dark yellow hue because of the dust it carried, will not abate until early next week.

The torrid weather has been felt across Europe, as far north as Sweden.

Since Thursday, four French nuclear reactors in three power plants near the Rhine and the Rhone Rivers, including Fessenheim, have had to be temporarily shut down. EDF said the decision was made to avoid overheating the rivers.

Nuclear power plants use water from the rivers to cool down the temperatures of their reactors before sending the water back into the rivers.

Rivers that are unusually warm can experience mass fish die-offs, which has happened in Germany in the past week. – PA