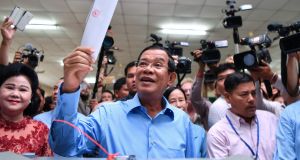 Cambodia’s prime minister Hun Sen prepares to cast his vote in a general election on Sunday in whicn is party claims ti have won all 125 seats in parliament. Photograph: Manan Vatsyayana/AFP/Getty Images

The ruling Cambodian People’s Party has claimed victory in all 125 seats up for grabs in the country’s election after a vote – in which the main opposition party was banned from competing – that was dismissed by human rights groups as a charade.

The US, Canada and Australia condemned the vote as a one-horse race engineered to ensure the CPP’s victory, and opposition parties described it as the “death of democracy” for a country that held its first postwar election with international support 25 years ago.

However, in an economy where China is a leading investor and backer of prime minister Hun Sen, Cambodian and foreign observers voiced doubts about the leverage other countries might bring to bear.

“The flawed elections, which excluded the country’s principal opposition party, represent the most significant setback yet to the democratic system enshrined in Cambodia’s constitution, and substantially erode Cambodia’s achievements in promoting political reconciliation and economic growth since the 1991 Paris peace agreement,” the White House said after the election, which it described as “neither free nor fair”.

The US said it was considering expanding visa restrictions it put in place for some Cambodian officials in December, after the opposition Cambodian National Rescue Party (CNRP) was dissolved by a court order and its senior figures banned from politics. The US has not disclosed how many officials have been or will be affected by the visa bans.

Julie Bishop, Australia’s foreign minister, said the election process had “reversed more than 25 years of progress towards democracy in Cambodia”. Canada said the election campaign that culminated in Sunday’s vote was “widely recognised to have been marred by voter intimidation and manipulation of the polls”.

Cambodia’s National Election Committee, which is dominated by officials associated to the ruling party, on Sunday said turnout for the vote was 82 per cent. If true, this would suggest that the CNRP’s calls for its supporters to boycott the polls were not heeded.

Some observers in Phnom Penh questioned the accuracy of the figure, claiming that polling stations appeared to be emptier on Sunday than in the country’s previous legislative election in 2013 and local poll in 2017.

“I was very surprised to hear the NEC announcement that the number of turnout was more than 80 per cent,” said Tola Moeun, executive director of Central, a workers’ and human rights organisation. He said he visited about seven polling stations in and near Phnom Penh on Sunday and found them “quiet”, but added that he could not say whether the official figure was wrong because Central did not monitor the poll.

Cambodian pro-democracy groups, along with the US, the EU and Japan, declined to field observer teams to monitor an election they viewed as rigged to favour Hun Sen’s CPP. One of the international observer groups that monitored the vote was a Russian-led delegation that included politicians from far-right and ultra-nationalist parties, including the UK Independence Party, France’s National Front and Italy’s Fratelli d’Italia.

At a press conference in Jakarta on Monday, politicians from the banned CNRP called on signatories to the 1991 Paris Peace Accords that ended Cambodia’s conflict, as well as members of the Association of Southeast Asian Nations, the regional grouping to which Cambodia belongs, to take steps to isolate the regime. They also urged Australia, where many senior Cambodian officials visit regularly or own property, to follow the US in taking action.

Kem Monovithya, the daughter of Kem Sokha, the CNRP leader who was jailed by the regime on treason charges last year, called on Indonesia and other countries in the region to speak up. “We have not yet heard from our friends in the region, specifically in Asean, about the situation that’s going on in Cambodia,” she said.

Vietnam, a communist-ruled one-party state and Asean member, on Monday congratulated Hun Sen on the high turnout and the “safe, free and fair” manner in which the vote was conducted.

“If Asean cannot get its act together on the Rohingya crisis, let alone pushing back against China in the South China Sea, it is not going to be audible on Hun Sen’s elected dictatorship,” said Thitinan Pongsudhirak, associate professor of political science at Thailand’s Chulalongkorn University.

Critics of the Hun Sen regime have called on the EU to suspend duty-free access for most Cambodian goods under the bloc’s Everything but Arms trade agreement benefiting poor countries. Some Cambodian-made exports including backpacks and luggage also enjoy preferential access to the US market. – Copyright The Financial Times Limited 2018