German city planners go back to the future with medieval makeover 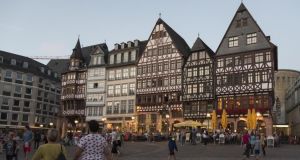 With “Just” and “Married” signs stuck to their backs, Tobias and Stephan are celebrating their wedding in Frankfurt with an unconventional cycling tour through Germany’s sun-drenched financial capital.

Their first stop is a shady square filled with half-timbered houses that could be 500 years old, but are scarcely older than the couple’s marriage two hours earlier.

Tucked in behind the historic town hall on the Römerberg square, a postwar reconstruction, Frankfurt has torn down a 1970s concrete block and replaced it with 15 reconstructed medieval houses and 20 new buildings complementary to the historical streetscape.

The project, dubbed architectural “repair work” by the city’s chief planner, will be opened officially in September but mayor Peter Feldmann says it has already “given the old town back its heart”.

Even before the shops move in, the area, a miracle of German engineering and stonemasonry, has proven a hit with locals and visitors.

In a courtyard of stone pillars, wooden stairs and balconies, in a style best described as “re-renaissance”, groom number one, Tobias, delivers a wide-eyed, one-word verdict: “Wow.”

Minding the bikes outside, groom number two, Stephan, fends off wedding party sceptics who see in the buildings a reactionary, architectural Disneyland.

“It looks very new now but in a while it will look old and nice,” he said.

Frankfurt’s new-old town is the latest example of a trend that started in post-unification Dresden, to restore old street layouts with buildings destroyed by Allied bombers and postwar planners.

In Frankfurt the architectural marriage of old, new, borrowed and even blue – a pretty building called Haus Würzburg – is even more striking, given its close proximity to the banking skyscrapers.

Pop down to the Main river and head east, Frankfurt visitors can take in another remarkable architectural landmark: the new headquarters of the European Central Bank.

It’s a striking 185m tower that, from a certain angle, looks like a 21st-century deconstruction of the United Nations’s East River headquarters in Manhattan.

The ECB’s arrival here three years ago catalysed a three-decade urban renewal of the surrounding Ostend district, once a wrong-side-of-the-tracks mix of market hall, freight depots and red-light district.

The city moved out the market in 2004, then residents – issuing compulsory orders for those who refused to leave – before demolishing swathes of the neighbourhood.

Today Frankfurt officials are proud at how they have turned around a former social ghetto, expanded the city’s footprint and opened it up to the river.

But critics call Ostend a textbook example of everything you can do wrong in urban renewal, with one leading study noting a “slow but clearly distinguishable change in the social structure favouring higher income groups”.

Turn into the Wingertstrasse in Ostend and a sign on number 21 promises “Perfection and Exclusivity”. Price: €300,000 for a 60sq m apartment.

The problem is that 83-year-old tenant Marianne Ried doesn’t want to move out of her home of 59 years.

“My husband and his brother built the building, I’ve lived here since then and now I have to go,” she said.

In the last five years she and her neighbours have battled new owners who have tried everything to get them out: windows replaced in the middle of winter, heating defective for weeks on end, and more.

Last week Mrs Ried had a special visitor: Andrea Nahles, the new leader of Germany’s centre-left Social Democratic Party (SPD). Since signing up to a third grand coalition with Angela Merkel in Berlin, her party remains on the wrong side of 20 per cent in the polls.

Nahles knows that affordable housing is the biggest political problem in Germany today.

In Berlin, rents have jumped 51 per cent since 2013. Munich residents are paying 80 per cent more than in the 1990s. Frankfurt needs 30,000 apartments more than it has, while people like Marianne Ried are being squeezed out.

A previous SPD effort to tackle the housing crisis, a rental cap, was so full of loopholes that many claim it actually catalysed rent rises. If the SPD cannot deliver on housing, Nahles can forget about reviving her party. After coffee and cake, Nahles promises the Frankfurt pensioner greater effort on housing but concedes “there is a strong lobby on the move”.

Moving back behind Frankfurt town hall, the first residents are carrying boxes into their faux-renaissance buildings. The demand for the rent-controlled apartments was so high, the new tenants were chosen in a locals-only raffle.

In their rush to silence gentrification critics, however, Frankfurt officials forgot a few clauses in the contracts. The first apartments are already up on Airbnb.