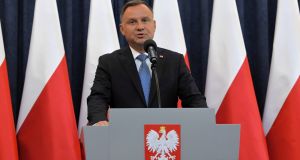 Polish president Andrzej Duda has tested positive for coronavirus but is feeling good, officials announced on Saturday, as the country imposed fresh restrictions to try to stem a surge in the disease.

“The president yesterday was tested for the presence of coronavirus. The result turned out to be positive. The president is fine. We are in constant contact with the relevant medical services,” presidential minister Blazej Spychalski said on Twitter.

One of the people Mr Duda met in recent days was tennis star Iga Swiatek - who said soon after the announcement that the president has been infected that she feels good, but will quarantine.

“Neither I nor members of my team have symptoms of coronavirus. We carry out tests regularly. We will quarantine ourselves in accordance with current procedures,” the 19-year-old said in a Twitter post.

Fresh from winning the French Open earlier this month and gaining national hero status for doing so, Swiatek met Mr Duda on Friday, when she was awarded the Gold Cross of Merit for her achievements in sports and promotion of the country internationally.

Mr Duda (48) holds a mosty ceremonial role, but has the power to veto legislation. He is an ally of the ruling nationalist Law and Justice (PiS) party.

“The president is a young man, I think that he will pass the infection without problems,” deputy health minister Waldemar Kraska told RMF radio.

He added that he expects that all people who had contact with Mr Duda in recent days will be quarantined. This should include Swiatek, he said.

Poland is seeing a sharp rise in Covid-19 cases, with new infections hitting a daily record of 13,632 on Friday. The country recorded 13,628 new cases on Saturday.

Poland has reported a total of 228,318 cases. The healthcare system has begun to buckle under the weight of mounting infections, forcing the government to set up field hospitals. - Reuters