Security forces threaten to use firearms against pro-democracy protesters 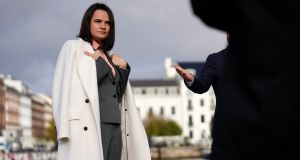 Belarus is braced for a weekend of protests and the expiry of a deadline that opposition leaders have given to its veteran president, Alexander Lukashenko, to resign or face a national strike that could pile pressure on his autocratic regime.

Several people have been killed, hundreds injured and well over 10,000 detained in an often-brutal police crackdown on protesters who have rallied in unprecedented numbers against Mr Lukashenko’s claim to have won an August presidential election.

The European Union and United States refuse to recognise a vote they say was rigged, while Russia has backed Mr Lukashenko with financial and security support and accused the West of trying to oust the ex-Soviet state farm boss who has run Belarus since 1994.

Opposition leader Svetlana Tikhanovskaya claims to be the rightful winner of the election, and earlier this month she gave Mr Lukashenko until Sunday to resign, end police violence and free all political prisoners.

“If our demands are not met by October 25th, then the whole country will come out peacefully on to the streets with a people’s ultimatum,” she warned him from Lithuania, where she fled after allegedly receiving threats after the election.

“And on October 26th a national strike of all enterprises will start, all roads will be blocked and sales in state shops will collapse . . . You are trying to paralyse the life of our country, not understanding that Belarus is stronger than the regime.”

Several EU leaders have met and expressed support for Ms Tikhanovskaya and her allies, and this week the bloc awarded its top human rights award, the Sakharov Prize for Freedom of Thought, to the Belarusian opposition movement.

Mr Lukashenko has rejected the demands of opposition figures that he derides as “puppets” controlled by foreign masters, and accused neighbouring Poland and Lithuania – two major critics of his 26-year rule – of posing a military threat to his country.

He has also patched up strained relations with Moscow and shown newfound enthusiasm for plans to integrate Russia and Belarus in a “union state” that would inevitably be dominated by the Kremlin.

“We are seeing a desire to try to change the existing order, the existing political system, by unconstitutional means,” Mr Naryshkin said in Minsk. “The outside influence is quite obvious.”

Mr Lukashenko said this week that “order will be restored on Sunday” and security officials have warned that police and military personnel are ready to shoot at protesters they claim are becoming violent and “extremely radical” – an allegation belied by scenes of more than 100,000 peaceful demonstrators marching through Minsk on recent Sundays.

Meanwhile, Nikolai Karpenkov, head of the Belarusian police’s anti-organised crime and corruption unit, warned: “We won’t let [protesters] destroy the country. We will, of course, use weapons against them humanely, including firearms.”