Covid-19: Trump goes on defensive as Biden claims president has ‘quit on America’

Speaking in his home city of Wilmington, Delaware, US presidential candidate Joe Biden has said that Donald Trump has given up on containing the Covid-19 virus. Video: Reuters 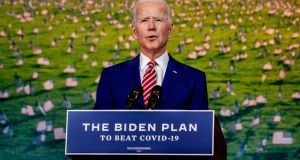 US president Donald Trump has told supporters in Florida that the coronavirus pandemic will end soon and accused Democratic rival Joe Biden of overstating the health crisis to scare Americans into voting for him.

The pandemic, which has killed more than 224,000 people in the US and cost millions more their jobs, has become the dominant issue of the campaign, with Mr Trump pushed on to the defensive over his administration’s handling of the crisis.

Mr Biden earlier in the day said the president had given up on containing the virus and promised if he wins the November 3rd election he will ask Congress to pass a comprehensive Covid-19 bill that he would sign within the first 10 days of taking office.

During two rallies in the battleground state of Florida, Mr Trump mocked Mr Biden for saying in Thursday night’s presidential debate that the United States was entering a “dark winter”.

“We’re going to quickly end this pandemic,” Mr Trump, who has played down the threat since it started, said in The Villages, a sprawling retirement community in central Florida. Later, he told a big crowd in Pensacola that the election was a choice “between a boom and a lockdown”.

Researchers at the University of Washington’s Institute for Health Metrics and Evaluation warned on Friday the virus could kill more than half a million people in the United States by the end of February. Roughly 130,000 lives could be saved if everybody wore masks, according to the study.

The campaign stops followed the second and final debate between the two contenders on Thursday night, when they sparred over how to handle the pandemic.

Mr Trump’s campaign said on Friday it had raised $26 million around the debate. Mr Biden’s campaign, which has trounced Mr Trump in the money race in recent months, did not release a fundraising figure from the debate but sent out appeals saying they were outraised.

“Debate days are usually some of our best for fundraising, but we didn’t see the surge we expected,” the campaign said in a fundraising alert to supporters.

With 11 days left until the election, more than 53 million Americans have already voted, a record-setting pace, according to the University of Florida’s Elections Project.

Michael McDonald, who administers the project, has said the election could set a modern turnout record, surpassing the 60 per cent participation rate of recent presidential elections.

The surge of early voting points to both intense interest in the race and a population eager to avoid risking exposure in Election Day crowds to Covid-19. The massive early vote total gives Mr Trump less leeway to change minds before voting concludes.

Opinion polls show him trailing Mr Biden nationally and, by a lesser margin, in several battleground states that will decide who sits in the White House on January 20th next.

“I think we’re leading in a lot of states you don’t know about,” he told reporters at the White House. - Reuters