Poland to ease virus lockdown ahead of contentious election 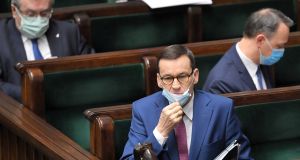 Poland plans to accelerate its exit from coronavirus lockdown next week, as it prepares for a presidential election by postal vote that critics fear could be undemocratic.

Polish prime minister Mateusz Morawiecki said hotels, shopping centres and outdoor sports areas could reopen next Monday, along with museums, art galleries and libraries on a partial basis. Pre-school facilities will be allowed to welcome back children from next Wednesday, at the discretion of their management.

Poland relaxed some restrictions on April 20th, when parks and forests reopened to the public and limits on the number of people allowed into grocery markets and certain shops were eased.

“The loosening of restrictions is due to the need to restart the economy,” Mr Morawiecki said on Wednesday.

“We are working quickly but flexibly. We are accelerating our work now, but a step back is possible . . . We have taken some control over the coronavirus, but not full control,” he added. “We don’t know what will happen in two or three months.”

The government foresees a step-by-step return to something resembling normality, which includes the relaunch of top-flight Polish football on May 29th.

“Sport is an important part of the national economy, which contributes to improving health and we are aware how important it is to restore normality,” Mr Morawiecki said last weekend.

Poland reported 197 new cases of coronavirus on Wednesday, bringing its total to 12,415, with 606 deaths.

The country’s relatively low testing rate is fuelling questions over the true extent of the virus in the country of 38 million, which is scheduled to hold a contentious presidential election on May 10th entirely by postal vote.

Legislation to allow a postal-only vote is yet to be approved by Poland’s opposition-controlled senate, however, prompting Mr Morawiecki to urge the upper house of parliament to speed up its deliberations. He also announced that the vote could be postponed for a week or two in May.

European Commission vice-president Vera Jourova reiterated her concerns over the election on Wednesday: “If I were a Polish citizen I would have many questions, because I would really like to have fair access to the voting.

“I would like to see the candidates campaigning in a fair campaign time,” she said, after announcing fresh EU legal action against Mr Morawiecki’s government over its sweeping judicial reforms.

“We cannot compromise or put in lockdown our fundamental rights and values,” Ms Jourova added. “The virus must not kill democracy.”

The Czech Republic is speeding up its own plans to ease lockdown after declaring that it had brought the virus under control.

Markets and small shops have already reopened, and amenities including hotels, pubs and restaurants are now due to restart work on May 25th, two weeks earlier than scheduled. Schools are expected to reopen on the same date, but attendance will not be compulsory.

Czech deputies voted on Tuesday to extend the country’s state of emergency until May 17th, one week less than the government requested.