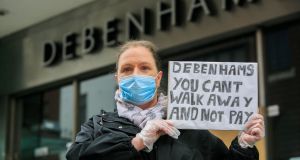 Marie Murphy from Donaghmede participates in a protest over conditions related to the closure of Debenhams, on Henry Street, Dublin. Photograph: Gareth Chaney/Collins

The Government has been urged to intervene to save more than 2,000 jobs in Debenhams and associated companies as the retail sector faces the possibility of over 100,000 jobs being lost due to the Covid-19 pandemic.

Some 30 Debenhams workers mounted a protest outside the company’s store on Patrick Street in Cork on Wednesday as they prepared to present an online petition signed by almost 20,000 people urging the Government to intervene.

The Mandate shop steward for Debenhams in Cork, Valerie Conlon, said workers remain in limbo since they learned by email on April 9th that Debenhams stores in Ireland were “not expected to reopen” after the Covid-19 lockdown.

“This announcement genuinely came out of the blue and I know people will wonder how that could be – given that the company was in administration in the UK but we were told our jobs were okay – so we weren’t expecting this at all.

“When we closed due to Government lockdown on the Monday after St Patrick’s Day, we genuinely thought we would be reopening again and we didn’t think there would be any problem coming back to work again.”

Ms Conlon, who has 24 years’ service at the Patrick Street store, said the Debenhams workers have received great support from the public, with some 19,300 people signing an online petition to get the Government to intervene.

Madeleine Whelan, who has 30 years of service at the Patrick Street store, said the workers were getting great political support from everyone, apart from Fine Gael, over Debenhams’ refusal to pay them any redundancy.

“Micheál Martin and Fianna Fáil have spoken up for us, Sinn Féin have raised our situation in the Dáil, as has Mick Barry of Solidarity – everyone really has spoken up for us, except Fine Gael, who have neither spoken to us or for us.”

Ms Conlon said: “Staff want answers because life is going to have to continue after all of this – we’re stuck in a stalemate at the moment and we understand the focus now is on Covid-19 but when this is over, our jobs are still gone.”

Among those joining the Debenhams workers on the protest, where participants maintained social distancing, was Mr Barry, Solidarity’s Cork North Central TD, who said the Government faces a choice on the entire retail sector.

“There’s a retail jobs massacre on the way with more than 100,000 retail jobs on the line, and it’s going to cost the Government more for people to go on the dole and not be paying taxes than it would be to keep the stores open.

“Many of these Debenhams stores are profitable, along with a profitable online business, so the Government needs to intervene here to save jobs – and let’s start by opening the books for inspection.”

Fellow Cork North Central TD, Thomas Gould of Sinn Féin, said Debenhams had reopened many of its stores in the UK, where it went into administration rather than liquidation, adding that the Government needed to get involved urgently.

“We have over 2,000 employees in Debenhams and the concessions stores nationally and then there are all the support jobs – if we lose Debenhams in Cork, it will be a disaster for the city with all the knock-on effects.”

Earlier this month, Debenhams Retail (Ireland) sought an order in the High Court for the winding up of the company and for the appointment of joint provisional liquidators Kieran Wallace and Andrew O’Leary of KPMG.

In a statement, Debenhams Retail Ireland Ltd said it was with great regret it had sought the order, but after exploring all other alternatives it had no option but to apply to the court to have a provisional liquidator appointed.

The company said it understood it was a very difficult day for staff in its 11 Irish stores, but that the decision was forced upon it by the withdrawal of the support of Debenhams Retail Ltd in the UK after it went into administration.

Despite entering into an examinership process in Ireland in 2016, it said the business has continued to make losses and its most recent audited accounts for the financial year ended September 2018 showed a loss of €21.625 million.

Debenhams set up in Ireland in 2006 when it took over the business of Roches Stores, which retained ownership of most of the buildings housing its 11 stores, including the Patrick Street store where Roches had been trading since 1919.