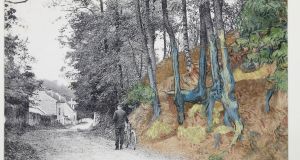 Wouter van der Veen took advantage of the coronavirus lockdown to organise his filing system. One day last spring, the scientific director of the Van Gogh Institute in Auvers-sur-Oise was digitalising a set of sepia postcards from 1900-1910 when he saw it.

The gnarled and twisted roots on the right half of the postcard titled “rue Daubigny, Auvers-sur-Oise” were identical to those in Tree Roots, Vincent van Gogh’s last canvas, painted on the day of his suicide.

It was Van der Veen’s eureka moment and it was “vertiginous”, he said in a telephone interview. “I felt I touched history with my finger. It was humbling, a challenge. I had goose bumps. I was happy and excited and a little scared. Such things are rare in the life of a researcher.”

When the lockdown ended, the Van Gogh Museum in Amsterdam, which owns the painting, sent two researchers and a dendrologist to visit the rue Daubigny with Van der Veen.

One hundred and thirty years after Tree Roots was painted, every element of the painting, “the shape of the hillside, the roots, their relation to each other, the composition of the earth and a steep limestone face”, are virtually identical, Van der Veen says.

The roots survived erosion and countless storms because they were coppiced, a traditional forestry method whereby certain species of trees put out new shoots from trimmed stumps or roots.

“It’s amazing that it has changed so little,” Van der Veen continues. “It’s a powerful symbol of Van Gogh’s life and oeuvre. He went through incredible trials, yet his works are still there. The villagers say acacia wood never rots. That explains why these roots are so hard, as if petrified.”

To mark the 130th anniversary of Van Gogh’s death this week, several dozen people, including Van Gogh’s great grand-nephew and namesake, Vincent Willem van Gogh, and the director of the Van Gogh Museum, Emilie Gordenker, travelled to Auvers-sur-Oise for the inauguration of the site. A fence has been erected in front of the copse, to protect the roots from vandals and over-eager art-lovers.

The mission of the Van Gogh Institute is to preserve the Ravoux Inn, 150m down the road, where Van Gogh lived for the last 70 days of his life, and where he died. The parcel of land in the rue Daubigny is privately owned. All levels of French local, regional and national cultural authorities are now negotiating its future.

Van Gogh was in the habit of painting his surroundings. He must have passed the copse each day on his way to the wheat fields where he painted, 400m from the Ravoux Inn.

On July 27th, 1890, Van Gogh painted the Tree Roots all day, then went into a wheat field where he shot himself in the chest with a small pistol before stumbling back to the Ravoux to die.

“He missed his heart. The bullet bounced off a rib and did a lot of damage before it lodged in his groin,” Van der Veen recounts. Van Gogh’s doctor, Paul Gachet, had been a field surgeon during the 1870 Franco-Prussian war and knew better than to operate.

Septicaemia set in. Theo was summoned from Paris. Vincent agonised for two days. “The sadness will go on forever,” were his last words to his brother.

Van Gogh had moved north to be near Theo. In Arles, he had suffered a bout of madness and was hospitalised for a year in the asylum at Saint-Rémy-de-Provence. There he tried repeatedly to take his own life.

Contrary to popular myth, Van der Veen says, Van Gogh was recognised by his contemporaries as a great avant-garde painter. In 1889, Claude Monet called him the best post-Impressionist. From a bourgeois family, he did not have money problems. He believed in the future value of his paintings.

Van Gogh was well when he settled in Auvers. “For the first 50 days, he was more motivated than ever. He had a furious desire to paint. He was in a fighting mood and created one masterpiece after the other, the Church at Auvers, Wheat Fields, and of course the portrait of Dr Gachet.”

Things started to fall apart in the first week of July. Van Gogh was seized by melancholy, which transformed itself into total depression. Theo had decided to spend his holiday in the Netherlands rather than Auvers with Vincent. The painter feared their bond was weakening.

Wheat fields are filled with horses, wagons and labourers for the July harvest, but in a sign of his solitude and depression, Van Gogh painted not one human figure during the last three weeks of his life.

Vincent returned repeatedly to the motif of roots in his correspondence with Theo. In 1882, he said he had painted roots in The Hague because “I wanted to express . . . through these black, knotty roots, something of the struggle for life.” Three weeks before his death, Vincent wrote again, “My life too is attacked at the very root.”

Van der Veen has titled his new book Attacked at the Roots. Yet he believes that for Vincent, “life triumphs in the end”.

Theo’s son Vincent was six months old when the painter died. He would later establish the Van Gogh Museum. “Vincent could say, ‘My name will continue. My oeuvre will continue without me’,” Van der Veen concludes.