One dead, nine wounded after school attack by man using sword in Finland 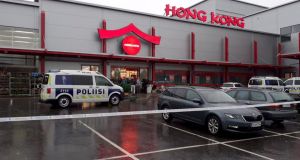 Police cars stand on the blocked grounds of the Hermanni shopping centre in Kuopio, Finland, after an attack occurred on the premises of the Savo Vocational College on October 1st. Photograph: Jaako Vesterinen/Lehtikuva/AFP/Finland/Getty

A man wielding a sword and a firearm has killed a woman and wounded nine other people at a vocational school in central Finland, police said.

The attacker was seriously wounded after police opened fire, and he was taken into custody in the town of Kuopio.

The police superintendent for eastern Finland, Mikko Lyytinen, told a news conference that officers were forced to shoot the man to prevent more bloodshed at the Herman shopping centre, which houses the college.

Police did not give the suspect’s age, but said he was born in 1994 and is a Finnish national without a prior criminal record. He was a student at Savo Vocational College, which occupies the shopping centre’s second floor.

The man’s apartment was later raided by police, and a cache of firebombs were found, but it was not immediately clear whether any were used in the rampage.

The motive for the attack remains unclear. The National Bureau of Investigation has taken over the investigation.

Police would not provide further details on the woman who was killed, but Finnish newspaper Keskisuomalainen said she was a student at the school and “the primary target” of the dark-clad attacker.

One police officer was slightly injured, and the rest of the wounded were students and staff of the school, mostly females aged 15-50. They were treated at a hospital for cuts.

Prime minister Antti Rinne tweeted that the violence was “shocking”.

The shopping centre is a few miles outside the centre of Kuopio.

A witness told Finnish newspaper Iltalehti the man entered a class with a bag and took out a sword and struck the teacher with it.

Panic broke out among the students and some of them started to throw chairs at the attacker who fled the scene, Iltalehti reported. – AP