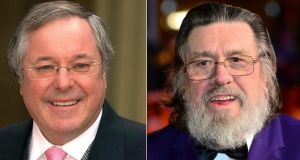 Late broadcaster Richard Whiteley’s asthma and poor grasp of technology provide compelling evidence that he was not masking a career in espionage, his partner has said.

Actor Ricky Tomlinson accused the long-time Countdown host of being an MI5 operative who helped orchestrate a plot to have him jailed.

Whiteley’s partner, Kathryn Apanowicz, branded the claims “ridiculous” and urged the Royle Family star to have a “long, hard look at himself”.

Tomlinson, a trade unionist, said a documentary fronted by Whiteley was government propaganda that swayed a jury that convicted him for offences linked to the 1972 builders’ strike.

He told the Chester Chronicle he has leaked classified documents showing late prime minister Sir Edward Heath and Labour MP Woodrow Wyatt were involved in a conspiracy to jail a group of striking workers, known as the Shrewsbury 24.

But Ms Apanowicz pointed to a string of her partner’s shortcomings which would cast doubt on his suitability for a role in the intelligence services.

She told the Press Association: “He was the most indiscreet person I knew, he could not keep a secret for toffee.

“Number one, he had an asthma inhaler so running around and escaping from whoever was chasing after him, he wouldn’t be able to do that,” she said.

“In those days, he didn’t have an Aston Martin, he had a brown Ford Escort.

“He couldn’t do maths — he used to struggle with the Conundrum.”

A campaigner who has spent a decade investigating the prosecutions said they had found no evidence to suggest Whiteley was connected to the security services “in any way”.

His radio presenter partner added that her family had been in “hysterics” at the idea of his alleged double life.

She said: “Really and truly, Ricky Tomlinson should take a long, hard look at himself and stop casting such stupid aspersions because it’s nonsense, he’s made himself look a bloody fool.”

Tomlinson said two jurors in the 1973 trial changed their verdicts after the documentary, Red Under The Bed, was broadcast by Yorkshire Television as the jury deliberated.

He told the Chronicle: “We found out this week that the film was designed, written, made and paid for by the security services.

“Woodrow Wyatt was a member of the security services and, unbelievably, so was Richard Whiteley, who hosted the show.

“Richard Whiteley from Countdown was a member of the intelligence services.”