No deal was avoided this week, but it has not gone away

The October extension is too short to do anything useful, but too long to tighten the screws on London 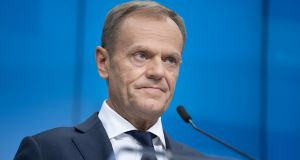 So what did it all mean, this long Brussels night? Britain got its extension, but are we any nearer a solution? Will everyone be back in October for a repeat performance? Brexit extension mark 3.

And then, perhaps, an annual one thereafter, suggested a tired London colleague, leaving the UK trapped in permanent limbo as a permanent leaver but one who never goes.

Unable to summon up votes to revoke article 50 or for a Brexit deal, but determined that a no-deal is not acceptable, the UK, Brussels cynics suggest, could match Turkey’s interminable attempts to join – but in reverse.

Council president Donald Tusk admitted that more time was possible. “It is our intention to finalise the process in October,” he said, but admitted that he was “too old to exclude another scenario”.

While EU leaders have not pledged that October will be the last period of extra time, said an official close to Tusk, the political bar for another one has been raised.

On Wednesday May told EU colleagues how well the talks with Labour were going, offering a lecture on how Westminster struggles with collaboration between the major parties.

The last time it happened was during the second World War when Winston Churchill ran the war and Clement Attlee ran the country. Boris Johnston is not the only one to channel Churchill.

On Wednesday, French president Emmanuel Macron was prepared to stand against those prepared to offer more time. By October he may be ready to veto.

Macron’s role was crucial. Determined to avoid a no-deal crash-out, he nevertheless is determined that the EU should keep up pressure on MPs to accept the withdrawal agreement.

Tusk sees this as a dangerous strategy that has not worked yet, and argued for more time. That, he told leaders, would allow them to take control out of May’s hands, and free up space for work on other problems.

By allowing the UK to leave early when it passed the withdrawal agreement, Tusk’s flexibility option protected May’s flank politically in Westminster to some degree.

Angela Merkel sided strongly with Tusk, taking issue with Macron. More time gives London space, she said: “From our point of view it was important not to put pressure on [the UK].”

In the end 19 of the 27 went in Tusk’s favour, seven were undecided, leaving Macron alone. However, he eventually forced the six months compromise. Too short to do anything useful, but too long to tighten the screws on London.

Macron, it is worth noting, was supported by Michel Barnier. Cynics believe Barnier wants to placate Macron, whose support he needs if he is to succeed commission president Jean Claude Juncker.

The timetable facing May is tight, however. By May 22nd she must say if the UK will hold European Parliament elections. If not, it is out by June 1st, with no deal.

That will also be the result in October, unless a new extension is granted, if the withdrawal agreement still has no Westminster backing. No deal was avoided this week, but it has not gone away.

Still time offers hope. “A week is a long time in politics – and we gave 29 weeks.…and many things could happen,” said one Brussels official. But not all of them may be good.

Fears that London could obstruct the EU’s business led to a warning that the EU27 will act without London’s say-so. Juncker, however, believes fears of guerilla war by London are exaggerated.

On October 31st, the Luxembourger promised jovially, there will not be another all-nighter, since it is the commission’s last day in office.