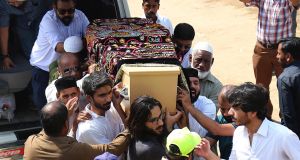 Relatives and friends attend the funeral of Syed Areeb Ahmed, one of the nine Pakistani victim of mass shooting in Christchurch, after his body was brought to Karachi in Pakistan. Photograph: Shahzaib Akber/EPA

The Australian man arrested over New Zealand’s mosques shooting massacre will face a total of 50 murder charges and 39 attempted murder charges when he appears in court on Friday, police said.

Brenton Tarrant (28) a suspected white supremacist, was charged with one murder the day after the attack on two mosques in Christchurch on March 15th and was remanded without a plea.

Fifty people were killed and dozens wounded as they attended Friday prayers by a lone gunman armed with semi-automatic weapons. The gunman broadcast his attack live on Facebook.

Prime minister Jacinda Ardern described the massacre, the worst mass shooting by a lone gunman in New Zealand, as a “terrorist attack” and some legal experts thought it could result in charges under New Zealand’s terrorism laws.

Tarrant is due to appear in Christchurch’s High Court through a video link at 10am local time (10pm Irish time) on Friday.

A High Court judge said in court minutes this week that the appearance would largely be procedural and that Tarrant would not be required to enter a plea to the charges he faced.

“The principal purpose of the call on 5th April will be to ascertain the defendant’s position regarding legal representation and to receive information from the Crown regarding certain procedural steps and when it is envisaged those steps will be completed,” said Judge Cameron Mander.

Police said on Thursday that other charges are still under consideration.–Reuters