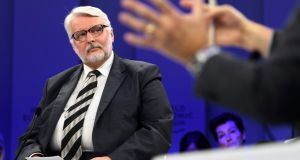 Poland has introduced a blacklist of Ukrainian officials who are barred from entering the country, ramping up a row over the neighbours’ bloody and disputed history that threatens to sour their close alliance against Russia.

Svyatoslav Sheremeta, who leads a Ukrainian commission on the commemoration of victims of the second World War, was refused entry to Poland on Saturday, just a day after urgent talks aimed at easing tension between Warsaw and Kiev.

It was the first such incident since Polish diplomats said their country would no longer admit Ukrainian officials who allegedly play down wartime atrocities committed against Poles or glorify nationalist groups who fought for Ukraine’s independence at the time, sometimes alongside Nazi forces.

Warsaw has denounced Mr Sheremeta’s commission for halting the exhumation of the remains of Poles in western Ukraine, in response to anger in Kiev over vandalism and destruction of Ukrainian cemeteries and memorials in Poland.

“The Ukrainian side has complained that Mr Sheremeta was not allowed into Poland,” Warsaw’s ambassador to Ukraine, Jan Pieklo, said after being summoned to the foreign ministry in Kiev. “I have also been informed that this is a problem that concerns the resumption of exhumations because Sheremeta is the person responsible for this,” he added.

Ukraine’s foreign ministry said the ban “contradicts the logic of the constructive agreements” reached in talks on Friday and expressed hopes for “the swift resolution of the unfortunate situation with Sheremeta”.

Representatives of the Polish and Ukrainian presidents met on Friday to discuss the longstanding dispute, which has been stoked by rising nationalism in both countries since Ukraine’s 2014 revolution and subsequent conflict with Russia, and the election of the populist Law and Justice party in Poland in 2015.

“The sides agreed that it was essential to remove the moratorium on search and exhumation work and to restart it generally,” the office of Ukrainian president Petro Poroshenko said after the meeting in Krakow.

“They confirmed their commitment to strengthening the strategic partnership of Ukraine and Poland” and would continue preparations for Polish president Andrzej Duda’s planned visit to Ukraine next month, the statement said.

Mr Duda said recently that he expected Mr Poroshenko to ensure that “people who openly express nationalistic and anti-Polish views will not hold important posts in Ukrainian politics”.

Polish foreign minister Witold Waszczykowski this month accused Ukraine of “using” Warsaw for support against Russia while failing to address deep disagreements over their 1940s history.

Ukrainian officials accept that wartime pro-independence militia committed atrocities against Poles but reject Warsaw’s claim that they amount to genocide, and they want Poland to give official status to places on its territory where Ukrainian fighters were killed and buried.