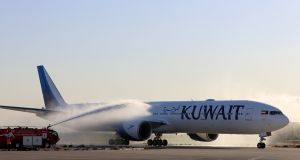 A Kuwait Airways Boeing 777-300ER. In its ruling the judge said transporting the Israeli citizen would have caused legal repercussions for the airline and the crew back in Kuwait, because of a state boycott of Israel. Photograph: Yasser Al-Zayyat/AFP/Getty Images

A German court has come under fire for dismissing a discrimination case taken by an Israeli student who was refused permission to board a Kuwait Airways flight.

The airline cancelled the man’s ticket for August 2016 from Frankfurt to Bangkok via Kuwait City after he revealed he had an Israeli passport.

The airline said it was not permitted to fly him but offered to book him on to a non-stop flight with another carrier.

The man, identified only as Adar M, lives in Germany, refused the offer and took the discrimination case seeking compensation, insisting the airline should be obliged to accept him as a passenger.

But a Frankfurt court has found against the Israeli man, saying that German law covers discrimination based on race, ethnicity or religion, but not nationality.

“It’s shocking for me that, in Germany in 2017, I am experiencing anti-Semitic discrimination and that a court shows understanding for this,” the student told the Bild tabloid.

In its ruling the judge said transporting the Israeli citizen would have caused legal repercussions for the airline and the crew back in Kuwait, because of a state boycott of Israel.

Backing the airline’s decision to cancel the ticket, the court said it was not about whether “this law make sense”, but noting unreasonable repercussions – including fines or prison time for staff – if the man was allowed to fly.

The Israeli man’s lawyer, Nathan Gelbart, called it an “embarrassing ruling for democracy and Germany . . . that cannot be allowed stand”.

The case has been appealed, with Mr Gelbart pointing to similar cases in the US and Switzerland ending in favour of the plaintiff.

The ruling has caused outrage in Germany, mindful of state-sponsored discrimination – and mass murder – of Jews in the Nazi period.

The Central Council of Jews in Germany said it was “intolerable that a foreign company operating based on deeply anti-Semitic national laws is allowed to be active in Germany”.

“An airline that practices discrimination and anti-Semitism by refusing to fly Israeli passengers should not be allowed to take off or land in Frankfurt,” the organisation said in a statment.

The Bild tabloid dedicated its main editorial to the case on Friday, noting that “unlike in Kuwait, German courts are thankfully independent”.

“What the government can and must do, however, is withdraw all landing rights for Kuwait Airwaves,” it wrote. “Whoever doesn’t want to do business with Israelis – and, let’s be honest, with Jews – has no business in Germany.”