Merkel’s coalition scrambles to survive after SPD leader steps down 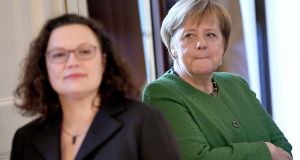 Germany’s grand coalition is scrambling to save itself after Sunday’s resignation of Andrea Nahles, leader of the junior Social Democrat (SPD) coalition partner.

After just 400 days as the SPD’s first woman leader, Ms Nahles said she was standing down as party chair, parliamentary party leader and MP because she lacked the “necessary backing” to lead.

In a parting shot at a growing chorus of internal critics, she urged the party to demonstrate “trust and mutual respect” in its search for her successor.

The 48 year old’s future looked bleak after two bad election results last weekend: 15.8 per cent in the European poll, down 11 points on 2014, and the loss of its seven-decade hold on Bremen, a former SPD stronghold.

Chancellor Angela Merkel, who has vowed to serve her full term as head of government until 2021, insisted “we will continue our work”.

Annegret Kramp-Karrenbauer, CDU leader, said this was “not the time for party tactical” games and insisted her party “stands by the grand coalition and wants to serve our country”.

“The CDU will continue to make its contribution to the stable functioning of this government,” she said.

Frontrunner to inherit the SPD leadership, Berlin’s most poisoned chalice, is federal finance minister Olaf Scholz. In an interview on Sunday, he raised the prospect of a snap election by insisting another SPD grand coalition with the CDU – the fourth since 2005 – was “indefensible”.

Malu Dreyer, a regional SPD leader and another leadership hopeful, demanded solidarity in a “very serious situation . . . or else things look bleak for the SPD”.

Others in the party are demanding a more radical departure, throwing their support behind 29-year-old leftist Kevin Kühnert.

After his party’s 2017 historic election disaster, Mr Kühnert lobbied for the SPD to reinvent itself in opposition. More recently he has floated the idea of nationalising BMW and, on Sunday, tweeted his “shame” at his party’s bruising treatment of Ms Nahles.

The SPD’s search for its seventh leader in a decade reflects a deep-seated identity crisis in Germany’s oldest party. Abandoned by traditional working-class voters and unattractive to new, younger voters, the party is squeezed between a centrist CDU and more radical alternatives in the Greens and Left Party. The party’s various wings have spent 14 years arguing over how centrist or left the party needs to be to survive.

But the SPD is not the coalition’s only weak link, with the CDU facing a slump in support amid rows with critics and an unprecedented power share at the top.

Dr Merkel is no longer the political force she was but, six months after handing over the CDU leadership, is not quite irrelevant either.

That has complicated the work of Mrs Kramp-Karrenbauer to build her public profile, make her mark on the party and shape German political debate to her favour.

A Sunday poll indicated 62 per cent of people do not think she is the right woman for the job.

Nervousness is growing among CDU and SPD ahead of autumn state elections in eastern Germany that could see triumphs for the far-right Alternative für Deutschland (AfD).

On Sunday, a jubilant Alice Weidel, AfD co-leader, likened Berlin’s coalition to a “zombie on the political stage”, losing limbs as it meanders around.

When Dr Merkel formed her first grand coalition with the SPD in 2005, they held nearly 73 per cent of Bundestag seats. A weekend poll suggested they no longer enjoy even a simple popular majority.

One weekend poll suggested the Greens are now Germany’s most popular party, one point ahead of the CDU on 27 per cent, while another put the Greens in second place on 20 per cent. In both polls the SPD’s slide continues: 16 per cent in one and, in the other, just 12 per cent.