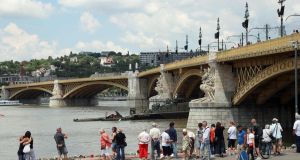 Tourists light candles at the Marit bridge in Budapest on Sunday, where onlookers gather to watch the operations of experts at the site where the crash took place on Saturday. Photograph: Ferenc Isza/AFP/Getty Images

Falling water levels in the Danube are slowly improving divers’ chances of reaching the wreck of a pleasure boat that sank in Budapest, claiming the lives of seven South Korean tourists, but 21 people are still missing after search efforts drew a blank.

The 27-metre Hableany (“Mermaid”) collided with a much larger river cruise ship in heavy rain last Wednesday night, and only seven of the 35 people on board are known to have survived after the sightseeing boat sank within seconds.

Nineteen South Koreans and two Hungarian crewmen are unaccounted for, and countries downstream on the Danube have been alerted amid concerns that victims may have been swept out of Hungary by the storm-swelled river.

Hungarian military, rescue and salvage crews have been above the wreckage for several days – and were joined by South Korean specialists on Friday – but dangerous currents and poor underwater visibility have prevented divers from reaching the vessel.

The Hungarian water authorities predict that the height of the Danube in central Budapest will fall to about 4metres by Wednesday, after peaking at about 5.9 metres on Saturday.

“We’ve been asking them to set up nets to prevent any loss [of bodies] from the boat, but the conditions are too bad for divers to get into the water... So now, the search operations are under way using helicopters and boats,” South Korean foreign minister Kang Kyung-wha said on Sunday after returning home from Budapest.

“We will see the state of the river and dispatch divers to check whether the search operation is possible or not. If we cannot do it on Monday, we plan to continue the operation the next day,” she told media in Seoul.

“From the beginning of the disaster, the South Korean and Hungarian governments asked Serbia to help in search operations. In particular, a dam between Serbia and Romania, located downstream, could stop objects there; so workers near the dam are trying to retrieve anything from the ship.”

Forensic experts from South Korea have also flown to Budapest, along with dozens of relatives of people who were on board the Hableany. All seven bodies that have been recovered after the accident have now been identified.

The captain of the Swiss-registered 135-metre Viking Sigyn, a Ukrainian citizen officially identified only as Yuriy C, was formally charged over the accident on Saturday.

He was initially detained for questioning last week on suspicion of “endangering waterborne traffic resulting in multiple deaths”, which carries a possible jail term of eight years.

A Budapest judge said the 64-year-old could be freed on bail if he wore a tracking device and did not leave Budapest, but he will remain in custody for now pending a ruling on prosecutors’ appeal against that decision.

Gabor Elo, a lawyer for the captain, said: “I do not want to enter into details about his testimony, but he did not change what he said when he was questioned as a witness: he did not commit any wrongdoing, and is extremely sorry for the accident.”