Bangladesh says it will bar Shamima Begum from entering country 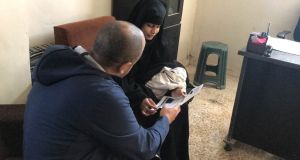 A young London woman who fled to Syria aged 15 to join Islamic State is not a Bangladeshi citizen and will be barred from entering the country, its foreign ministry has said.

Shamima Begum, now aged 19, said she wanted to return to the UK with her newborn baby, with the end of the so-called caliphate in Syria within sight.

But British home secretary Sajid Javid revoked her British citizenship in a move only permissible under international law if it does not leave the individual stateless.

There had been speculation that Ms Begum, who is of Bangladeshi heritage, may have citizenship there but its minister of state for foreign affairs, Shahriar Alam, denied this on Wednesday.

A statement tweeted by the minister said: “The Government of Bangladesh is deeply concerned that she has been erroneously identified as a holder of dual citizenship shared with Bangladesh alongside her birthplace, the United Kingdom.

“Bangladesh asserts that Ms Shamima Begum is not a Bangladeshi citizen. She is a British citizen by birth and has never applied for dual nationality with Bangladesh. It may also be mentioned that she never visited Bangladesh in the past despite her parental lineage.

“So, there is no question of her being allowed to enter into Bangladesh.” The statement added that Bangladesh had been made aware of the situation only by the media. Ms Begum’s family’s lawyer, Tasnime Akunjee, had earlier said she was born in the UK, had never had a Bangladeshi passport and was not a dual citizen.

Ms Begum was one of three schoolgirls to leave Bethnal Green to join the terror group, also known as Isis, in 2015 and resurfaced heavily pregnant at a Syrian refugee camp last week.

On Wednesday, she was shown a copy of the Home Office letter that announced her British citizenship would be stripped. She told ITV News: “I don’t know what to say. I am not that shocked but I am a bit shocked.

“It’s a bit upsetting and frustrating. I feel like it’s a bit unjust on me and my son.” She went on to say she may try for citizenship in the Netherlands, where her husband – an Islamic State fighter – is from.

Mr Javid defended of the British government’s willingness to use the citizenship powers to prevent the return of “dangerous individuals”. He told the House of Commons that the was never taken lightly, adding: “But when someone turns their back on the fundamental values and supports terror, they don’t have an automatic right to return to the UK.

“We must put the safety and security of our country first and I will not hesitate to act to protect it.”

While refusing to discuss individual cases, he said each was “carefully considered on its own merits, regardless of gender, age or family status”.

Ms Begum’s comments sparked intense debate about the UK’s responsibilities to those seeking to return from Syria. The case took a dramatic turn on Tuesday when it emerged Mr Javid had opted to strip Ms Begum of her British citizenship.

The British Nationality Act 1981 provides the home secretary with the power to take such action if it is “conducive to the public good”. A protracted legal battle over the move is now looming with international law forbidding nations from making people stateless.

Lord Carlile, former independent reviewer of terrorism legislation, said Ms Begum could challenge the decision, and described it as a “complex issue” that could take a while to resolve. “It could run for a very long time through the courts,” he told the BBC.

“I suspect that the result is going to be that she will stay where she is for maybe two years at least.”

Figures for 2017 show that 104 people were deprived of their British citizenship, up from 14 in the previous year. – PA