The Chinese president channels early struggles into ascent to leadership 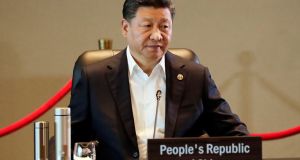 In the cave in Liangjiahe where the 15-year-old Xi Jinping was sent in 1969 during the ravages of the Cultural Revolution, there is a felt mattress on a traditional heated bed known as a kang, propaganda posters, books, vacuum flasks and not much else.

Liangjiahe is such a bleak outpost it is difficult to imagine how the young Xi went from this cave of political exile to the Great Hall of the People nearly four decades later, when the Communist Party elite abolished presidential term limits to allow him to rule indefinitely and become the most powerful Chinese leader since Mao Zedong.

Though the younger face is thinner, the determined expression characteristic of Xi today was noticeable even then

Born in Beijing in June 1953, Xi was the son of the revolutionary hero Xi Zhongxun, a founder of the Communist Party who had been a vice-premier in the 1950s.

During the Cultural Revolution – a 10-year purge of “impure” elements of Chinese society up to Mao’s death in 1976 – the young Xi’s family suffered terribly. Xi Zhongxun was demoted to running a tractor factory, even though he had been a close ally of Mao. Xi’s elder half-sister Xi Heping died, most likely by suicide.

Xi Jinping was sent to Liangjiahe as part of Mao’s “Up to the Mountains and Down to the Countryside” policy. He escaped several times and was punished by Red Guards, while his mother, Qi Xin, was forced to denounce her son.

Despite his treatment during the Cultural Revolution, Xi did not turn on the party. Instead, he harnessed the chaos and hardship of those seven years and channelled them into his ascent to the supreme leadership.

Throughout the country, people volunteer praise for him and it is clear that he is popular. “Xi Jinping’s logic is that everyone can live together. He cares about the people. It’s like t'ai chi, harmonious and disciplined,” says one party scholar.

T'ai chi is about exercise and health, but it has a martial arts element. During his ascent to power, Xi has seen off hostile factions, clearing his way to the top by removing formidable rivals such as one-time rising star Bo Xilai, former security chief Zhou Yongkang and one-time Politburo member Sun Zhengcai.

There are several pictures of Xi on the cave walls from his time in Liangjiahe. Though the younger face is thinner, the determined expression characteristic of Xi today was noticeable even then. Xi has always said he “left his heart” in Liangjiahe, and it’s here that his strongman tactics began to take shape.

On one cave wall, in a foretaste of the current tensions between China and the US over trade, is a poster showing two giant fists crushing US presidents Richard Nixon and Dwight Eisenhower as well as a gang of revisionists from China’s then-rival, the Soviet Union.

“All countries who are against us are pests and enemies and must be cleared out,” reads the slogan, from a poem by Mao.

Xi’s approach to leading China constitutes a sharp break from that of the previous administration under president Hu Jintao and premier Wen Jiabao, who seemed content to have technocrat status and focused on building the economy.

After serving time as party leader in Hebei, Fujian and Shanghai, among other places, Xi finally reached the peak of power in November 2012 and currently occupies the three most senior positions in China: general secretary of the Communist Party, president and head of the military.

The vote in the Great Hall of the People last March, removing presidential term limits and enabling Xi to govern indefinitely, ended the system of collective leadership and succession introduced by former leader Deng Xiaoping after the death of Mao, with the aim of eliminating a cult of personality.

The party scholar, who requested anonymity, says she believes that westerners are too hung up on the abolition of the time limit. “If we obey time limits and don’t get the best leader, then what is the point? Westerners think one, two, three, but we Chinese are happy to go one, three, then two if we get the best leader,” she says.

By espousing globalism in the face of growing US protectionism, Xi has positioned China as an alternative to the US

Xi has cemented his grip on power by capitalising on public discontent about rampant corruption to punish more than 1.5 million officials, both senior “tigers” and junior “flies”. He has overseen a tightening of control and has increased pressure on dissenting voices, jailing human rights lawyers and cracking down on dissent in civil society, the media and the internet.

Alexander Dukalskis, assistant professor at the school of politics and international relations at University College Dublin; believes Xi’s chief aim is for China to attain national greatness and to be respected on the international stage.

“Consolidating power domestically provides the foundation to do so. When China is weak or divided internally it is not possible for it to exert as much influence internationally,” says Dukalskis.

There is no inherent contradiction in Xi’s flexibility in espousing globalism and capitalism while preaching a Marxist message – China has been doing it for many years.

At one regional university, over a holiday period, a group of classmates exchanged messages on the social network WeChat, including remarks critical of government policy. On their return to university, they were brought in by police, and their teachers had to intervene on their behalf. They were told they were banned from ever working in government.

Xi has built a “Great Wall of Steel” around the restive western province of Xinjiang, where the United Nations says hundreds of thousands of Muslims are being kept in re-education camps, described by Beijing as “vocational centres” to wean young people away from extremist violence.

In Hong Kong, promised a high degree of autonomy under the Basic Law governing the territory since it reverted to Chinese rule in 1997, Xi has warned democracy advocates not to cross a “red line” and undermine Beijing’s authority. “One consistent element of Xi’s tenure has been a scepticism of ‘western’ political ideas,” says Dukalskis.

China’s burgeoning economy has given it influence, but Xi has added a political dimension to the mix. By espousing globalism in the face of growing US protectionism, he has positioned China as an alternative to the US, a stance that has proven popular with countries in Africa and Latin America.

Steve Tsang, director of the Soas China Institute, part of the University of London, believes that by emphasising Marxist-Leninist values and centralising state agencies, Xi and the party aim to control the economy and everything else.

“But this will also mean that the party will have to get its policies right in order to avoid major problems developing. Muddling through as an option is being eroded as this process deepens,” says Tsang. “Xi believes in the superiority of the socialist system and only tolerated the capitalist bits to enable China to return to socialism with Chinese characteristics.”

This could signal trouble if he undermines the dynamic private sector while building up the public sector.

Back in Liangjiahe, in Xi’s cave quarters a display shows the books he read during his time there. As well as the usual Karl Marx tracts, there is Ernest Hemingway’s The Old Man and the Sea and Leo Tolstoy’s War and Peace.

The Communist Party has always loved a struggle narrative, and Xi has proven adept at embracing this legacy to serve his image of man of the people, driven by ideology but also patriotism – and his reputation as a man who succeeded in making the long journey from a dusty cave to the core of the constitution.