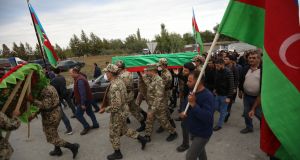 Azerbaijani servicemen carry the coffin of a soldier killed in military clashes in the city of Barda, Azerbaijan. Armed clashes have erupted in the territorial conflict between Azerbaijan and Armenia over the Nagorno-Karabakh territory. Photograph: Aziz Karimov

Deadly fighting has continued between Azerbaijani and Armenian forces over the disputed region of Nagorno-Karabakh, stoking fears of an all-out war that could drag in regional powers including Russia and Turkey.

Six days of clashes in and around the mountainous region, which is officially part of Azerbaijan but has been run by its ethnic Armenian majority since a war in the early 1990s, have claimed about 200 lives and focused attention on the South Caucasus, where the interests and ambitions of several powerful states intertwine.

Armenia said on Friday it was “committed to a resolution of the conflict through peaceful means” and welcomed a joint call for talks from Russia, France and the United States, which have led long-running mediation efforts through the so-called Minsk group of the Organisation for Security and Co-operation in Europe.

“While this aggression against Nagorno-Karabakh will continue to receive our strong and resolute response, we stand ready to engage with the OSCE Minsk group co-chair countries to re-establish a ceasefire,” Armenia’s foreign ministry added.

Azerbaijan gave no indication that it was ready to stop fighting, however.

“If Armenia wants to see an end to this escalation of the situation, the ball is in Armenia’s court,” said Hikmet Hajiyev, a senior aide to Azeri president Ilham Aliyev. “Armenia must ends its occupation” of Nagorno-Karabakh, he added.

Turkey is Azerbaijan’s main ally and has offered unequivocal support to the autocratic Mr Aliyev in the current conflict, while denying Armenian allegations that Ankara’s military was directly involved in the fighting.

“The Minsk trio of the US, Russia and France making ceasefire calls after years of ignorance does not make sense,” Turkish president Recep Tayyip Erdogan said on Thursday. “Permanent peace in the Nagorno-Karabakh region will only be possible if Armenia leaves the Azerbaijani lands it has been occupying.”

“A red line has been crossed, which is unacceptable,” Mr Macron said. “I urge all Nato partners to face up to the behaviour of a Nato member.”

The issue adds strain to EU-Turkish relations that are already frayed by Ankara’s recent controversial gas exploration in the eastern Mediterranean, and the fighting again places Turkey and Russia at odds in a conflict zone, as they are in Syria and Libya.

Armenia hosts a Russian military base and is part of Moscow-dominated security and economic organisations. The Kremlin has sought to maintain good relations – and arms sales – to both Armenia and Azerbaijan however, only to lose influence in Baku in recent years as Turkey’s role has grown.

Iran, which borders mostly Christian Armenia and Muslim majority Azerbaijan, is also closely monitoring the situation. Tehran is wary of Turkey’s ambitions in the wider region, has a large Azeri minority and is also concerned by Azerbaijan’s ties to Israel: Baku exports oil to Israel and imports its high-tech weapons – an arrangement that prompted Armenia to recall its envoy from the Jewish state this week.