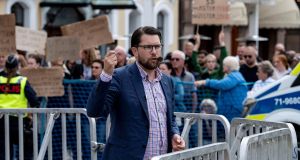 Sweden’s political landscape looks set to be redrawn after one of the country’s mainstream parties went back on its word and said it was prepared to work with the nationalist Sweden Democrats.

A cordon sanitaire has been in place around the populists for almost a decade but on Wednesday the head of the Moderates, the largest of the four traditional centre-right parties, held talks with Jimmie Akesson, the Sweden Democrats’ leader.

Ulf Kristersson said he could envisage co-operating with the populist party on immigration, law and order, and energy policies.

“On these issues, of course I want us to be able to co-operate in parliament. I am convinced that now is the time to go from talking to action in Swedish politics. Sweden cannot continue as now,” Mr Kristersson said after the meeting, which he described as “constructive”.

Mr Kristersson’s comments were at odds with the vow he made before the 2018 vote “not to co-operate, talk, collaborate, [or] govern with” the Sweden Democrats.

The talks came as the Sweden Democrats boast record numbers in opinion polls, even topping some of them ahead of the governing centre-left Social Democrats.

The four centre-right parties failed to capitalise on popular discontent with the government in last year’s elections and two of the smaller parties – Centre and the Liberals – decided to back the centre-left coalition rather than allow the Sweden Democrats any influence over policy.

Political experts said Mr Kristersson’s U-turn on working with Mr Akesson reflected a sense that the centre-right had little chance of governing Sweden without accommodating the nationalist party.

“This is an important step. Sweden in this way is becoming more like other European countries where centre-right parties co-operate with radical right parties such as Denmark, Norway or Austria, ” said Ann-Cathrine Jungar, associate professor at Sodertorn University.

The Sweden Democrats, who enjoy the support of almost one in four Swedes, have seen their popularity rise due to a surge in immigration to the Scandinavian country in 2015 and a recent wave of shootings and bombings in the largest cities of Malmo, Stockholm and Gothenburg.

Mr Akesson has sought to moderate the image of the Sweden Democrats by introducing a zero-tolerance approach to racism and increasingly gaining voter credibility on the issues of immigration and integration.

The cordon sanitaire was placed around the Sweden Democrats in 2010 when they first entered parliament under the government of ex-prime minister Fredrik Reinfeldt, a former head of the Moderates. The main reason given was the Sweden Democrats’ roots in the neo-Nazi movement as well as the supposed radicalness of their policies.

But the rise in violence in Sweden, including hand grenade attacks and multiple shootings, has led many of the mainstream parties to toughen their own policies on immigration and crime. Mr Kristersson told the Financial Times last year that Sweden was facing a crisis every bit as serious as the country’s financial problems in the 1990s.

Ms Jungar said the Sweden Democrats were squeezing the traditional parties on both the centre-left and centre-right by taking voters from them, in part leading to Mr Kristersson’s change of heart. “It’s about power. The only way now for the centre-right parties to form a government is to co-operate with the Sweden Democrats. The alternative is a cross-bloc government with the left - and that is unthinkable,” she added. – Copyright The Financial Times Limited 2019