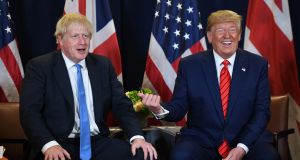 Donald Trump landed at Stansted airport last night for a two-day visit that has Conservative strategists in a tall state of anxiety while Labour and the Scottish National Party (SNP) savour the prospect of the trouble he might cause. As I report here Jeremy Corbyn wrote to Trump yesterday asking him to confirm that the NHS would be off the table in trade negotiations and that the US would not seek better terms for its pharmaceutical companies that could lead to higher drug prices in Britain. Nicola Sturgeon joined in overnight, warning that Scotland’s NHS would be “on the line” if Boris Johnson allowed the health service to be part of any trade deal with the US.

Despite their warnings about the NHS being put up for sale, the opposition parties are not suggesting that Johnson would have to sell off the health service to US providers. But they are worried that Trump, who has complained about foreign “freeloaders” paying too little for US medicines, will demand better terms for pharmaceutical companies.

Johnson is keeping joint public appearances with Trump to a minimum during the two-day Nato summit – which will be held at a hotel in Watford – with no joint press conference and no bilateral meeting yet confirmed. He has asked the US president not to endorse him, suggesting it is best if they keep out of each other’s elections. But there is nothing he can do to stop Trump tweeting or telling journalists what he thinks.

The programme tracked the lives of three children among the four million living in poverty in Britain, surviving on food from foodbanks and huddling in the cold after they have exhausted their food allowance. At one stage, an eight-year old-girl empties her piggy bank of its total contents of 47p to help her mother feed the electricity meter.

Just landed in the United Kingdom, heading to London for NATO meetings tomorrow. Prior to landing I read the Republicans Report on the Impeachment Hoax. Great job! Radical Left has NO CASE. Read the Transcripts. Shouldn’t even be allowed. Can we go to Supreme Court to stop?

Johnson likes to distance himself from the Conservatives’ record in office, presenting his administration as a new government willing to spend more on health, education and policing. But his manifesto is not promising any changes to the benefits system or any specific measures to address child poverty.

None of this will make any difference to the election if the Conservatives succeed in winning over enough former Labour voters in the Midlands and the North of England. A Channel 4 News focus group of people who voted Leave in 2016 and backed Labour in 2017 suggests that the Conservatives are on track to do just that. You can watch it here.

Stephen Bush in the New Statesman says Britain is a normal-sized polling error away from a Labour government.

“He would be seething at his death, and his life, being used to perpetuate an agenda of hate that he gave his everything fighting against” – Dave Merritt on his son Jack, who died in the London Bridge terror attack.

Nato leaders arrive in London for a two-day summit
10.30am Jeremy Corbyn on ITV’s This Morning
11am Nigel Farage campaigns in the East Midlands
3pm Jo Swinson visits a farm near Chelmsford to warn about the impact of Brexit and a US trade deal