Germany’s SPD rows back from threat to quit Merkel coalition 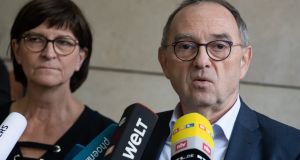 Germany’s Social Democrats are stepping back from their threat to pull out of Angela Merkel’s government after the new party leadership softened its demands for big changes to the coalition’s priorities.

Norbert Walter-Borjans and Saskia Esken said they had signed off on a “compromise” motion for the SPD’s annual congress in Berlin on Friday, calling for measures including a “massive” investment programme and a minimum wage of €12 per hour.

But the motion contains no threat to pull out of the coalition if the SPD’s proposals are not accepted, nor a clear timeframe. The motion states: “Neither remaining in the coalition nor leaving are an end in itself. For us, the question of whether or not to remain in the coalition is not a priority.”

The document is a notable climbdown from the anti-coalition rhetoric that propelled the leadership campaign of Mr Walter-Borjans and Ms Esken. The left-wingers soundly defeated a leadership slate that included Olaf Scholz, the finance minister, in a vote less than a week ago that highlighted the deep discontent among SPD rank-and-file with the party’s recent performance and its role as a junior partner to Dr Merkel’s Christian Democrats.

Ms Esken, in particular, had vowed to force Dr Merkel and her allies to renegotiate the coalition treaty or push for an “orderly retreat” from the government.

The prospect of that retreat, however, appears to have sharply diminished – at least in the near term. Party members are expected to confirm the motion at Friday’s congress.

Ms Esken said the motion, agreed with members of the SPD executive, was weaker than she would have liked. “This is a good compromise. But you have to understand that this is not the pure doctrine that we ourselves are convinced of.”

Mr Walter-Borjans said: “We have always said ... that we want to stand together and build bridges. I think we managed that.”

Senior Christian Democrat leaders made clear repeatedly in recent days that they were not ready for a wholesale renegotiation of the coalition treaty. There was particular apprehension surrounding the demand from SPD left-wingers such as Ms Esken to abandon the government’s balanced budget commitment.

The so-called black zero policy has come under attack from economists, trade unions and even Germany’s business lobby. But it continues to enjoy strong support from CDU leaders and from Mr Scholz, who has argued that balanced budgets are compatible with a steady increase in public investments.

Like other SPD ministers, he has argued consistently in favour of staying in the grand coalition.