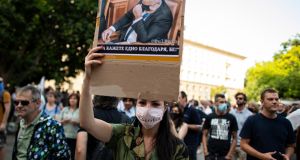 Anti-government protesters in the Bulgarian capital, Sofia, on Tuesday. Mr Borisov insisted he would not step down at a time when Bulgaria faced great hardship from coronavirus and its economic impact. Photograph: Vassil Donev/EPA

Bulgarian prime minister Boyko Borisov has rejected calls to resign from the country’s president, its main opposition party and protesters who demand an end to corruption and impunity.

Thousands of people have rallied in the capital, Sofia, and other Bulgarian cities over the last week after a series of incidents ignited public anger over the privileges enjoyed by a tiny elite in the EU’s poorest member state.

Protesters accuse Mr Borisov’s government of preserving and profiting from a system of murky deals between politicians and businessmen, and the demonstrators’ cause is backed by president Rumen Radev and his allies in the opposition Socialist party.

The Socialists lodged a parliamentary no-confidence motion in the government on Wednesday, but Mr Borisov insisted he would not step down at a time when Bulgaria faced great hardship from coronavirus and its economic impact. The coalition government is expected to survive the vote next week.

“Their wish for this government to resign won’t help the situation,” he told a cabinet meeting. “I’m sad that the nation is so deeply divided at this moment, when I don’t know how we’re going to get through the coming months.”

Mr Borisov, a former fireman and bodyguard who has governed for most of the last decade, said Bulgaria needed stability and to focus on securing significant economic recovery funds at an EU summit later this week.

“We hear you, we are thinking and we will present ideas for social assistance in every area,” he said, while arguing that his government should rule until elections due next spring.

“I appeal to the president and opposition: hard months are ahead, and if we have a new government everyone will ask, where is our unity and agreement?”

Mr Borisov (61) has been under pressure since leaked photographs appeared in local media last month showing him sleeping at his residence next to a handgun and a bedside table which separately was shown to be full of €500 bills and gold ingots.

He said the pictures with the cash and gold had been staged or doctored, and suggested Russia and political enemies including Mr Radev were behind the leak.

Public anger soared last week when guards from the national protection service manhandled an opposition politician at a beach near the villa of influential politician Ahmed Dogan, who is seen as being close to Mr Borisov. The beach is public property and the guards are supposed to protect only senior state officials.

Prosecutors say the protests are funded by fugitive millionaire Vasil Bozhkov. The gambling tycoon, nicknamed The Skull, fled to Dubai earlier this year when facing arrest, and has since claimed that for years he paid millions of euro in cash backhanders to Mr Borisov and associates.

The US embassy in Sofia has said it supports “the Bulgarian people as you peacefully advocate for increased faith in your democratic system and promote the rule of law . . . No one is above the law.”

1 Coronavirus: 396 more cases as public is urged to help protect ‘older and vulnerable’
2 The Sack of Balbriggan: The burning of a town that shocked the world 100 years ago
3 The FinCEN files: The billion dollar a month money trail
4 Lockdown measures and rising anger in Madrid as Covid takes hold again
5 Coronavirus: Public health experts considered idea of moving Dublin to Level 4
Real news has value SUBSCRIBE