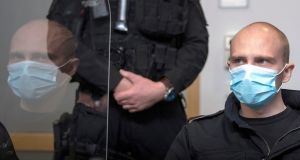 Stephan Balliet sits in the courtroom of the regional court at the beginning of the trial in Magdeburg, Germany on July 21st. Photograph: Hendrik Schmidt/dpa via AP

Wearing a bullet-proof vest, a blue face-mask and leg-irons, a 28-year-old man has gone on trial for murder over his attack last year on an eastern German synagogue.

On October 9th last year, Stephan Balliet, a self-described neo-Nazi, attempted to shoot and bomb his way into a synagogue in the eastern city of Halle during services for Yom Kippur, the most solemn day in the Jewish calendar.

After failing to break through the synagogue’s locked, reinforced door, he shot a female passerby and then a man in an adjacent kebab shop - attacks he live-streamed on the internet.

Mr Balliet has admitted carrying out the attacks, which he told the court on Tuesday were triggered by the 2015 refugee crisis that brought around one million people into Germany.

“After 2015 I decided to do nothing more for this society that wants to replace me with Muslims and n*****s,” he said, prompting a warning that further such remarks could see him expelled from proceedings.

“I began to arm myself,” he said. First he bought weapons, then he began building his own using instructions and materials he found online. Motivated by New Zealand’s Christchurch attacks, when a gunman killed 51 people in two mosques, he decided to plan a similar attack.

In response to questions from presiding judge Ursula Mertens, Balliet framed his attack as a sign of protest against Germany’s multicultural society.

He brushed off further questions about his upbringing and private life as “unimportant”, but admitted he found refuge online and was, in real life, lonely and isolated.

“I didn’t know anyone well enough to carry out a terror attack with them together,” he said with a laugh.

Mr Balliet described his memory of the attack on October 9th last, and his frustration at being unable to gain access to the synagogue. First he shot dead a local 43-year-old woman who shouted at him because “if I hadn’t, they’d all have laughed at me . . . she was a danger so better pump a magazine into her”.

Minutes later he shot dead a 20-year-old man he presumed was a Muslim because of his darker skin and hair.

He then fled Halle and was apprehended by police 50km away. In pre-trial detention he made an escape attempt from prison and, in the Magdeburg courtroom on Tuesday, was flanked by six police officers.

The Halle attack shocked Germany and sparked fresh alarm about rising rightwing extremism and anti-Jewish violence. Prosecutors say Mr Balliet made a “very comprehensive” confession, confirming “far-right and anti-Semitic motives”. Before the attack he published documents online that called for the killing of all Jews.

During the trial, scheduled to continue until October, the court will be shown his video of the attack. A psychological assessment of the gunman concludes he has a complex personality disorder with elements of autism but was aware of his actions and is thus exempt from criminal responsibility.