Refugee cleared of suspicion over fire in Nantes cathedral 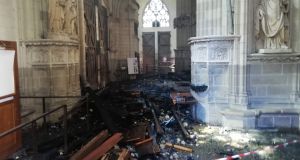 The remains of the burnt organ after falling from the first floor during a fire inside the Saint-Pierre-et-Saint-Paul cathedral in Nantes, western France. Photograph: Fanny Andre/AFP/Getty

French police cleared a 39-year-old Rwandan refugee of all suspicion on Sunday and released him after questioning the man about a fire at the 15th-century cathedral in the French city of Nantes.

“He is not implicated. The inconsistencies that came up have been clarified,” Nantes prosecutor Pierre Sennes told Reuters.

The fire engulfed the inside of the Gothic structure on Saturday, destroying a grand organ, stained-glass windows and a painting.

Authorities opened an investigation for suspected arson. Mr Sennes said on Saturday that three fires had been started at the site and there had been no signs of a break-in.

The man who was arrested on Saturday worked as a volunteer at the cathedral and had been in charge of locking up the building on Friday night. He had been held to clear up inconsistencies in his schedule. He was not identified.

The blaze happened just over a year after a fire at the Notre-Dame Cathedral in Paris destroyed its roof and main spire. Mr Sennes said the man in custody was being held to clear up inconsistencies in his schedule.

The fire began in the early morning, engulfing the inside in massive flames, and dozens of firemen brought it under control after several hours. Smoke was still coming out of the Gothic structure later on Saturday morning.

It was not the first time fire has damaged the cathedral in Nantes, which is about 340km (210 miles) southwest of Paris.

It was partly destroyed during the second War Two in 1944 after Allied bombings. In 1972 a fire completely ravaged its roof. It was finally rebuilt 13 years later with a concrete structure replacing the ancient wooden roof.

In 2015, a fire that appeared to have been caused by renovation work destroyed most of the roof of another church in Nantes, the Saint Donatien Basilica. – Reuters