Lara Marlowe reports from Paris on the morning after Emmanuel Macron won the French presidential election, defeating Marine Le Pen with 65.8 per cent of the vote. Pictures: Reuters 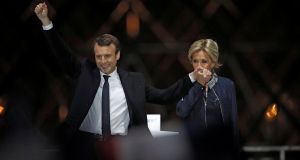 French President elect Emmanuel Macron and his wife Brigitte Trogneux celebrate on the stage at his victory rally near the Louvre in Paris, France. Photograph: Christian Hartmann/Reuters

France has chosen as its next president a polished career technocrat, a middle-class énarque who in time-honoured tradition moved seamlessly between the upper echelons of business and government before being taken under the wing of a party grandee and making the sideways move into politics.

In his campaign, he extolled French grandeur, pledged to shake up the labour laws, spoke of renewing the Franco-German relationship and argued that French interests could best be advanced through a strong European Union.

Put like that, the outcome of this French presidential election was much like every other the country has had since the fifth republic was created in the 1950s.

If there’s a type of person who ends up in the Élysée Palace, history shows us, it is someone who looks and sounds very much like Emmanuel Macron.

What is conventional in Macron belies the rupture his election represents, however.

First, the scale of his achievement. Macron was in effect a non-party candidate. Eighteen months ago, some polling companies were not even including his name on their mock ballot papers.

His hastily assembled political movement, En Marche!, was a low-budget outfit built largely around Macron himself. It relied on young volunteers and lacked the organisational know-how of even the middle-ranking powers of French politics, let alone the two behemoths: the centre-right Les Républicains and the Socialist Party, in whose government Macron had served as economy minister for two years.

In opting not to contest the socialist primary and strike out on his own, Macron was well positioned to ride a wave of popular disenchantment with the two political groupings that had controlled France for half a century.

His campaign made a virtue of that independence, positioning him as “neither left nor right” – a third-way alternative to the sclerotic ruling duopoly.

Out of tune with the zeitgeist

The anti-establishment mood turned potential weaknesses, such as his relative youth (39) and inexperience (he had never run for elected office) into some of his greatest assets. He turned out to be a good campaigner. And as others – Hollande, Sarkozy, Juppé, Fillon, Valls, Hamon, Mélenchon – fell, Macron stayed standing.

He did so while brandishing a message that might have seemed out of tune with the zeitgeist. In the year after Brexit, with memories of the euro crisis still fresh in voters’ minds, he proclaimed full-throated enthusiasm for European integration.

In an era of populist revolt, leaders such as Theresa May in Britain and Mark Rutte in the Netherlands have responded to the far-right threat by commandeering its policies and its rhetoric. Macron did the opposite.

He did not promise restrictions on immigration, push back on free trade or sound sceptical about globalisation.

In the ideological battle between nationalism and globalism, closedness and openness, he didn’t hedge his bets. His reward – 65 per cent of the popular vote – was an emphatic riposte to the fatalism that has gripped many of his liberal counterparts across Europe.

He was also lucky. He was blessed with rivals prone to self-destruct. And he was fortunate that when he finally made it to the run-off on Sunday, it was Marine Le Pen of the Front National he faced in the two-way contest.

While Le Pen has made progress in detoxifying the party and expanding its reach beyond its traditional heartlands, she was never going to win the plurality of votes required to win a second round. Macron could have spent the past two weeks at the beach and still won.

Greater challenges lie ahead. While he enters the Élysée with a strong mandate and international goodwill ringing in his ears, Macron will soon find that being non-party is more helpful on the campaign trail than it is in the corridors of power. He must await the results of legislative elections next month and then attempt to assemble a working majority that can see him through the next few years.

The incoming president will take charge of a country that is deeply divided. In the first round on April 23rd, about 45 per cent of votes were cast for candidates who rejected the current economic order as well as France’s place in the European Union.

Le Pen may not have come close to victory, but the Front National has emerged stronger from the election.

It won almost 11 million votes, making huge inroads across the north and east of France and nearly doubling the support it received when Marine’s father, Jean-Marie Le Pen, contested the run-off against Jacques Chirac in 2002.

The populists advanced. The centre held. The Macron presidency will go a long way to deciding which of those trends proves the more enduring.