Macron has shown grit and guile, but can he go the distance?

Emmanuel Macron promises to unite a torn France and to renew the ties between Europe and its citizens in his first speech since elected president. Video: Reuters 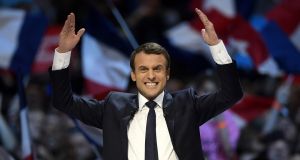 Emmanuel Macron: “I practise benevolence. I have never said a negative sentence against anyone.” Photograph: Eric Feferberg/AFP/Getty Images

The newly elected president Emmanuel Macron faces the near impossible challenge of reversing France’s decline and reconciling a deeply divided population while the country remains under the threat of jihadist attacks.

Tackling the 10 per cent jobless rate, which rises to 24 per cent among young people, is Macron’s first priority. He has promised to legislate by decree if necessary to simplify the labour code.

Macron says he will undertake an audit of France’s public sector, which consumes 57 per cent of GDP, the highest level among developed countries. In the autumn he will present a plan to make €60 billion in government savings, while lowering property taxes, payroll charges and corporation tax.

The man who is about to take on these Herculean tasks grew up in a family of doctors in Picardy, “in happy seclusion with my parents, brothers and sisters and my grandparents”, he writes in his autobiographical manifesto, Revolution.

“I was extremely close to my grandmother,” Macron said in the short autobiography on the website of En Marche, the political movement he founded in April 2016. “She was a school principal. If my reflection and political commitment had only one origin, it would be her.”

Macron described drinking hot chocolate and listening to Chopin while studying grammar, history, geography and literature with his grandmother in afternoons after school. It was François Hollande’s lack of compassion on the death of his grandmother, when Macron was an adviser at the Élysée Palace, that persuaded him to break with the outgoing president.

Against all odds, he seduced and eventually married Brigitte Trogneux, the first great challenge of his life

The other woman behind Macron is his wife, Brigitte Trogneux. Like the heroes of 19th-century novels by Balzac, Flaubert and Stendhal, Macron fell in love with a much older woman. He was a 15-year-old school student. Trogneux was a French and drama teacher nearly 25 years his senior when they met. Against all odds, he seduced and eventually married her, the first great challenge of his life. Macron’s victory on Sunday night was also hers.

Macron showed the same tenacity in academia. When he failed to gain admission to the prestigious École Normale Supérieure, Macron regrouped and earned a doctorate in philosophy at the University of Paris, where he wrote a thesis on the common good.

He earned a second degree, from the Institut des Sciences Politiques, then passed the daunting competitive entry exam for France’s elite civil service college, the École Nationale d’Administration. That qualified him for a job on a presidential inquiry into the lack of growth in the French economy.

Hate figure for the left

Frustrated in the civil service, Macron seized an opportunity to join the Rothschild investment bank, where he earned €2 million in his last 18 months. Though he took a 90 per cent pay cut to join President François Hollande’s staff in 2012, his successful stint in banking made him a hate figure for many on the French left.

Macron’s intellectuality has been the most ignored aspect of his character. He was for several years an assistant to the late French philosopher Paul Ricoeur, a leader in the field of hermeneutic phenomenology. Ricoeur is often quoted by President Michael D Higgins.

“I still read him constantly and use his reflections and philosophy to nourish my action,” Macron said of Ricoeur in his online biography. Macron helped Ricoeur write Memory, History, Forgetting, and served on the editorial board of the intellectual review Esprit.

Because Charles de Gaulle invested such great powers in France’s highest office, it is often referred to as the “monarchical presidency”. Macron, one suspects, would like to embody Plato’s philosopher king.

Macron sometimes comes across as a goody-goody. “I practise benevolence. I have never said a negative sentence against anyone. I don’t want to be dragged into the [political] circus,” he told Le Monde last year. At campaign rallies he scolded supporters when they booed his opponents.

Yet an iron will underlies Macron’s polished manners. That was very much in evidence in his May 3rd debate with the extreme right-wing candidate Marine Le Pen.

The new French president also demonstrated his tough streak in the political slayings of his former mentor and predecessor, François Hollande, and the former prime minister Manuel Valls, both of whom he drove out of the presidential race. Macron avoided the brash effrontery that former president Nicolas Sarkozy used to destroy Jacques Chirac. Hollande and Valls both supported his bid for the presidency. When Macron is inaugurated, probably on May 14th, the country will watch the potent symbol of him ushering Hollande down the steps of the Élysée.

Macron lists work as the first of his values. “It is through work that one becomes what one wants to be,” he wrote in his online autobiography.

Like many successful people, he has perhaps lost sight of how difficult life can be for the losers. Three gaffes alienated struggling French people from Macron. In September 2014, he referred to slaughterhouse workers who were about to lose their jobs as “illiterate”. A year ago, when protestors against the labour law tried to block his path, he said, “You don’t scare me with your T-shirt. The best way to buy a suit is to work.”

“But I dream of working,” a protester snapped back.

On the campaign trail in January, Macron made the mistake of lamenting that “alcohol and tobacco addiction took hold” in a former mining district in northern France.

Macron has repeatedly angered the French left. He exhorted French young people to want to be billionaires. Referring to the 35-hour week, he said “the left thought France could get better by working less”.

Macron is lucid. Three years ago, the French presidential press association invited Macron, then a presidential adviser, to lunch. We asked him about criticism of Hollande. “The French have a habit of electing a monarch whom they then execute,” he said.

The French academician Pierre Nora described Macron’s campaign as “completely oriented towards the future,” adding that “He wants to be the French Kennedy of a ‘new frontier’ ”.

Although he has often been compared to JFK, Macron more resembles Barack Obama, who offered his moral support a few days ago. They share deep love for the grandmothers who raised them, and intellectualism that sometimes distances them from “the people”. If En Marche does poorly in legislative elections, Macron too could struggle to carry out his programme.

Macron has never before been elected to public office. His main accomplishment as a cabinet minister was modest deregulation of private coach transport and Sunday trading. The biggest question hanging over his election is: will he have the fortitude to go the distance?

At worst, Macron could be a slight improvement on Hollande, so eager to achieve consensus that he sacrifices change on the altar of civil peace. At best, he will go some way to achieving his goals of renewing political life and uniting the French people. It is just possible that Macron’s youth, energy, pragmatism, optimism and, yes, benevolence, will infuse France with a new spirit. One hopes so, for it feels like the last chance.

December 21st, 1977 Emmanuel Macron is born in Amiens, Picardy. Both parents are doctors in the public health service.

1992 Macron meets Brigitte Trogneux Auzière at the Jesuit lycée La Providence. He is 15; she is 40, with a husband and three children. They marry in 2007.

2007 After a earning a doctorate in philosophy and a degree from the Institut des Sciences Politiques, Macron graduates from the prestigious École Nationale d’Administration.

2012 President Francois Hollande appoints Macron deputy secretary general of the Élysée and economic adviser. He is an architect of the business-friendly “Pact of responsibility and solidarity”, which marks Hollande’s switch to supply side economics in January 2014.

April 6th, 2016 Macron founds En Marche! meaning “Forward!” He proclaims the political movement bearing his initials to be “neither left nor right”.

August 30th,2016 Macron resigns from the government, saying he has “touched with my finger the limits of our political system”.

November 16th, 2016 Macron announces his candidacy for the presidency of France.

May 7th, 2017 Macron is elected the eighth and youngest president of the Fifth Republic.