Emmanuel Macron promises to unite a torn France and to renew the ties between Europe and its citizens in his first speech since elected president. Video: Reuters 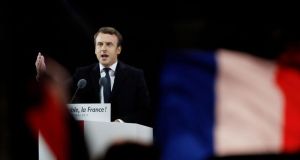 Much of France, Europe and the world heaved a huge sigh of relief last night when the independent centrist Emmanuel Macron won a landslide victory in the French presidential election against Marine Le Pen, the leader of the extreme right-wing Front National (FN).

Mr Macron surpassed all predictions by winning won 65.8 per cent of the vote, to 34.2 per cent for Ms Le Pen, according to estimates. The result seemed to signal an end to the populist wave that resulted in the Brexit vote and Donald Trump’s election last year.

“I know the anger, the anxiety, the doubts that many of you expressed,” Mr Macron said in a solemn speech lasting six minutes. “It is my responsibility to hear them, to protect the most fragile, to better organise solidarity, to fight all forms of inequality or discrimination while ensuring . . . your security and guaranteeing the unity of the nation.

“I shall defend France . . . I shall defend Europe,” Mr Macron continued. “I will work to mend the bond between Europe and the peoples who comprise her.

“Your victory is a victory for a strong united Europe and for German-French friendship,” the German chancellor Angela Merkel tweeted.

“There is hope for Europe!” the Italian prime minister Paolo Gentiloni tweeted.

Donald Tusk, the former Polish prime minister who presides over summits of EU leaders, congratulated the French “for choosing liberty, equality and fraternity over tyranny of fake news”, an allusion to false information spread on social media in the run-up to the election.

Even Donald Trump, who was praised by Ms Le Pen, tweeted his congratulations to Mr Macron “on his big win today,” saying he “very much [looked] forward to working with him!”

For once, the adjectives “unprecedented” and “extraordinary” had real meaning. Mr Macron, age 39, is France’s youngest president and has never before been elected to public office. His victory was a stinging rebuke to the socialists and Gaullists who alternated in power for the last six decades.

“My responsibility will be to calm fears, to make us optimistic again, to get back the spirit of conquest . . . I will fight all the forces of division that undermine us and knock us down,” Mr Macron said.

When he founded his En Marche! movement in April 2016, Mr Macron declared himself “neither left nor right”. In a country that is deeply suspicious of capitalism, weary of the EU and sees itself as a victim of globalisation, he dared to openly embrace free trade and to advocate further European integration.

Ms Le Pen telephoned Mr Macron to congratulate him “because I have the higher interest of the country at heart,” she said her two-minute concession speech.

With tears in her eyes, Ms Le Pen thanked the 11 million French people who voted for her. “With this historic, massive result, they have made the patriotic and republican alliance the first force of opposition to the plans of the new president,” she said.

The first round on April 23rd “confirmed a major deconstruction of French political life by the elimination of the old parties,” Ms Le Pen continued.

“The second round organises a political recomposition of huge proportions between patriots and globalists,” Ms Le Pen said, promising to represent the “patriots” in the June 11th and 18th legislative elections.

The defeated candidate also promised a “profound transformation” of the FN “to constitute a new political force that many French are clamouring for.”

Analysts believe Ms Le Pen’s poor showing in the election may precipitate the transition to leadership by her 27-year-old niece, Marion Maréchal Le Pen, who is an FN deputy in the outgoing National Assembly.

If there was a flat note for Mr Macron, it was the extent of abstention and the high number of blank votes. Twenty-six per cent or 12 million voters, the highest proportion in the second round of a presidential election since 1969, refused to choose between Mr Macron and Ms Le Pen by staying home. Another four million voted blank.

The total of 16 million abstentions and blank votes far surpassed the 11 million votes gained by Ms Le Pen, making the disillusioned and disinterested the second party of France. Mr Macron will strive to win their support in the upcoming legislative elections.

Mr Macron’s score was the second highest since the Fifth Republic was founded by Gen Charles de Gaulle in 1958, surpassed only by Jacques Chirac, who was re-elected in 2002 with 82 per cent of the vote, against 17 per cent for Ms Le Pen’s father, Jean-Marie.

In the 15 years since Jean-Marie Le Pen sent shock waves across Europe by making it to the presidential run-off, the FN’s share of the vote has risen from 5.5 million to more than 11 million votes , an all time record for the extreme right-wing party, which has roots in the second World War Vichy collaborationist regime and the revolt against Algerian independence at the end of the 1954-1962 war.