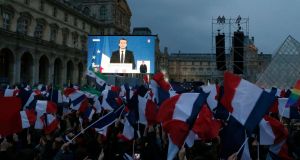 Emmanuel Macron’s supporters at the Louvre museum watch the president-elect give a speech in Paris. Photograph: AP Photo/Francois Mori 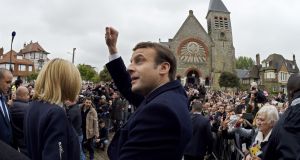 Emmanuel Macron has been elected president of France, according to projections, with the 39-year-old centrist winning 65.1 per cent of the vote to defeat far-right leader Marine Le Pen.

The result is a remarkable triumph for Mr Macron, a former banker who has never held elected office and is now set to become the country’s youngest head of state since the creation of the modern French republic. He will also be the first non-party president, and his ability to form a stable government will hinge on the outcome of legislative elections next month.

Mr Macron won an emphatic 65.1 per cent, according to a projection announced by France 2 television at 8pm French time (7pm Irish time) on Sunday, with Ms Le Pen trailing on 34.9 per cent. Turnout was estimated at 74 per cent, the lowest in the second round of a French presidential election since 1969.

“A new page in our long history has turned tonight,” Mr Macron said as the results emerged. “I want it to be that of rediscovery of hope and trust.”

One of Mr Macron’s first telephone calls after French TV networks called the result was from his predecessor and one-time mentor, François Hollande, who congratulated the president-elect. The victory showed a majority of French people wished to unite around the “values of the republic” and to show their attachment to the European Union, Mr Hollande said in a statement.

Ms Le Pen conceded defeat shortly after the projections were announced and said she had congratulated her opponent. But she pointed to the Front National’s “historic” vote and claimed the mantle of France’s main opposition, calling on “all patriots” to join the party in constituting a “new political force”. Her deputy said this new force would not be called the Front National.

Victory for the young, pro-EU Mr Macron will be greeted with relief in key European capitals. Mr Macron, who served as economy minister under Mr Hollande from 2014- 2016, positioned himself as an economic and social liberal, as an advocate of free trade and European integration.

A shock win for Ms Le Pen would have upended French politics and plunged the EU into a fresh crisis. On the campaign trail, the Front National figurehead had pledged to close borders, withdraw France from the euro zone and scrap trade treaties.

In a tweet within minutes of the projections, a spokesman for German chancellor Angela Merkel congratulated Mr Macron, saying his success was a victory for “a strong and united Europe” and for Franco-German friendship.

British prime minister Theresa May also congratulated Mr Macron. “France is one of our closest allies, and we look forward to working with the new president on a wide range of shared priorities,” she said in a statement.

Even in defeat, Ms Le Pen’s vote was projected to be almost twice what her party scored the last time it reached the presidential second round, in 2002, illustrating the scale of voter disaffection with mainstream politics in France.

Fusing the nativist, anti-immigrant policies with which her father, Jean-Marie, established the Front National as a force in French politics, with her own anti-globalisation and protectionist rhetoric, Ms Le Pen significantly expanded the party’s base.

She made huge gains in the depressed industrial towns of the north and east, building on the party’s traditional heartland in the south.

Mr Macron’s victory caps a remarkable electoral cycle that began with Mr Hollande’s unprecedented decision not to seek re-election and culminated in the first round of voting last month with a humiliating defeat for the two political blocs that have ruled France for half a century.

In rejecting both the Socialist Party and the centre-right Les Républicains, voters underlined deep divisions in French society. In the first round on April 23rd, about 45 per cent of votes were cast for candidates who rejected the current economic order as well as France’s place in the European Union.

In a final, eve-of-election surprise, Mr Macron’s team said on Saturday that a massive hack had resulted in huge volumes of the campaign’s emails, documents and campaign-financing information being dumped online.

The country’s electoral control commission requested media to refrain from disseminating details of the leaked material. It also mandated the French cybersecurity agency to investigate the attack and address any issue.