Study finds evidence of nearly 4,000 cases of abuse, and says it ‘continues to take place’ 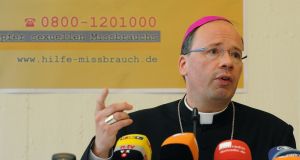 Bishop Stephan Ackermann of Trier, who was appointed head of German Catholic efforts to investigate the scale of abuse in church ranks, described the results as “depressing and shameful for us”. File photograph: Torsten Silz/AFP/Getty Images

German researchers have uncovered evidence of at least 3,677 cases of clerical physical and sexual abuse in the German church over seven decades.

A 350-page report, due to be presented later this month but leaked on Wednesday, found the most recent cases date from 2010. This suggests that abuse of minors by Catholic clerics in Germany is in no way a “historical phenomenon but . . . continues to take place”.

The study covers 38,000 church files from 27 German dioceses, with indications that 1,670 German clerics abused mostly young boys, up to a half under 13 years old at the time. The vast majority of victims had contact with clergy in a religious or pastoral context and over half – 969 – were altar boys.

The number of collated abusers corresponds to 4.4 per cent of active religious – rising to 5.1 per cent among parish priests. But the authors warned that “this represents a low estimate”.

Weeks after the Philadelphia grand jury report uncovered decades of clerical abuse, and a papal visit to Ireland dominated by its abuse legacy, the German abuse report uncovered about 600 incidents of statutory rape.

In echoes of Ireland, researchers found that many priests facing accusations were moved without their new parish being informed of the circumstances.

By doing so, German bishops had “recklessly or consciously accepted” the related risk to children in new parishes, the authors of the report said.

They also flagged a low rate of interaction with state authorities. Just 38 per cent of those accused faced criminal charges in German courts, and the church contacted the police in just 7 per cent of known cases.

One-third of the perpetrators faced internal church disciplinary measures. Some 27 per cent of cases ended in no sanctions while just 7 per cent of alleged abusers were either defrocked or excommunicated.

Researchers discovered “clear indications of file manipulation” in some cases, they said, while two dioceses said files containing details of sexual abuse had been shredded in the past.

Bishop Stephan Ackermann of Trier, appointed head of German Catholic efforts to investigate the scale of abuse in church ranks, described the results as “depressing and shameful for us”.

The Vatican had no immediate comment on the report, which was leaked to the Der Spiegel and Die Zeit weeklies two weeks before its official launch.

The research report was commissioned by the German Bishops’ Conference and was carried out over four years by a research collective from three universities in Mannheim, Heidelberg and Giessen.

But there are questions about the report’s independence and findings. The first researcher charged with the task resigned after learning he would not have access to original records.

This blockade remained in place for the second research team. Instead they drew up questionnaires which were completed by church employees – and their legal advisers – with sole access to the files.

The vast majority of abusers – 61 per cent – appeared to be one-off cases, 47 per cent were behind two to 10 cases, while serial abusers of 100 cases or more accounted for 5.7 per cent of the total.

In their report the authors describe the celibacy rule as one possible factor in abuse and urge the church to “reconsider urgently” its “fundamental rejection . . . of ordaining homosexual men”.

The authors suggest their report can only be a first step and recommend full and independent inquiries in individual German dioceses.

They advise bishops, when presenting the report later this month, to offer a co-ordinated strategy that presents a “long-term catalogue of measures” that avoids “talk but no action”.